Swami Masturbananda -- The Life Of The Party

A WEEK ON THE TEACHINGS OF SRI MASTURBANANDA (7) 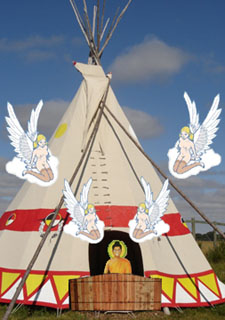 There's many reasons to follow the teachings of Swami Sri Masturbananda. One, they're beautiful in every way, as he leads us in beholding glimpses of divine consciousness, several seconds at a time. And another, there's so much more ahead, as we couple that with a deepening awareness of our standing in divinity. The good news is, even if it takes us a million incarnations to advance in that, the glimpses aren't going anywhere. We can huff and puff and blow the house down every day of the week.

I've been thinking of the master all day, thinking of his example, and how he leads the way. There's really no one else quite like him, so full of grace ... and, uh, the pearly essence. He doesn't just make allowances for the workings of the flesh, he encourages it. And even though he is so far advanced, being among the highest avatars of deity, he's still grounded in the here and now, showing his chelas (students) the best ways it's done.

It's hard to believe he's -- I don't know -- maybe 200 years old, maybe older, but through his daily rounds of meditation, he gets it on like a 20 year old. The lesson there is, it doesn't matter ... when you're eternal, in mind and body, 20 or 2,000's all the same. So in that, too, there's a message for us. Your bathroom is a blessed portal to the eternal realms.

Sri Masturbananda, then, is one to know, to cherish, and to emulate. So it has always been, maybe going back to the first caveman. I'd like to think the swami made preincarnational visits to the world even back then. Let's say you've got a frustrated caveman. He thinks life is nothing but flint knives and arrowheads. His dad was killed in a dinosaur stampede. His mom bundled him up and took him to The Land Before Time. He's like ... 20 years old, right at the peak of his powers, but he doesn't know it. Then Sri Masturbananda comes hovering in a vision, explaining, in clinical language of course, the facts of life. For the young man, this explains why the dinosaurs are playing piggyback all the time. Then, next thing you know, the young guy's got a grasp ... on matters ... and it all ends rather happily.

Whether that happened or not, one thing's for sure, the master has been active in recent centuries. Wherever he makes his appearances, the world gives him great acclaim. Seriously, the guy's always the life of the party.

In India, the master's homeland, they have religious fairs every 12 years called the Kumbha Mela. Swamis, gurus, and holy men and women come from near and far to set up their tents and offer blessings to the people. You've got tons of people in scanty loincloths, their business hanging out everywhere; it's quite a sight. I was there a few years ago, and I still recall this one guy in a white sheet laying on the ground, his legs up, no underpants, and a direct shot of his business. Frankly, to me it was gross. I saw him walking around a couple days later, and I thought about asking him "how they're hanging," but I already knew!

But no matter who is there -- some of the most famous appearances of the legendary guru Babaji have taken place at this festival -- there's one master who outshines the rest, and that is of course Swami Sri Masturbananda. When he's there, everyone gathers 'round, as close as they can get, to hear the teachings and to take part in the action. He'll be in his tent, a beatific look on his face as he teaches. Then when it comes time to practice his meditations -- No man can look upon him in his heat and live! -- he zips the door shut. In those precious moments, everyone beholds the great lights coming forth from his tent, the visitations of nude angels, and the occasional loud sound of splat within. It's a great time for one and all.

The key thing for all of us to understand, though, is that we don't even have to leave our home to be in communion with this saint. Whether it's India, or your own home, your own bathroom, Swami Sri Masturbananda's spirit is there -- right here today -- for each one!
Posted by dbkundalini at 5:46 PM