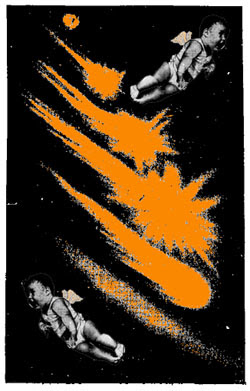 There's a song we used to hear that is never played anymore. To me it's the weirdest, oddest, and strangest Christmas song, of those apparently not meant to be weird, odd, and strange.

Remember "There's a Star in the Sky"? I know if you do your mouth just dropped in horror, and you're likely objecting to the fact that someone dared mention it again. Wasn't that song safely excluded years ago from our common memory? Swept under the rug, never to be resurrected? In that case, I'm sorry ... but I was somehow reminded of it, by some involuntary brain tick.

Now that I've ventured out, I'll go further. I remember how this song would bring entire groups of people to a standstill. They might be gathered for Christmas, frolicking, with everyone in a good mood, joyous and giving gifts. You'd think we were one big happy family in common celebration. Then this song would come on -- usually played by a pirate radio station that happened to encroach on the normal radio band -- and every smile would vanish. Fangs would grow in people's mouths. Normal eyes -- blue, brown, hazel -- would turn red, and very beady. They'd breathe fire. Children would turn to devils, more so than usual.

I can easily remember my own feelings of dread and despondency. I would suddenly go quiet, then tear up, and finally -- this happened occasionally -- I would be depressed for weeks. Even writing about it as I am now is making me physically sick, not to mention the emotional toll it's taking. I might retch on my computer; Good God, seriously, I'm falling apart!

The lyrics of the song (here I'm attempting a chuckle), must have been written by a monster. Like I said, I'm chuckling. I'm amused that they've been hidden in my memory all this time without subliminally destroying my life. I'm obviously a lot stronger than I sometimes give myself credit for. I thought they were gone forever, that I had erected a brick wall against them. But not so!

Remind yourself, should you dare:

"There's a song in the air, there's a star in the sky,
There's a mother's deep prayer, and a baby's low cry.
And the star rains its fire while the beautiful sing,
For the manger in Bethlehem cradles a king."

There's other lyrics but these are the only ones, thank goodness, still cluttering up valuable space in my consciousness.

What makes them so objectionable? It's hard to state the reasons in a definitive way. It beggars a full description, much like trying to say definitively why we're afraid of snakes. We just are; it's primal. In the case of the song, part of it has to be the terrible tune, itself enough to curdle fresh milk. And curl toes.

As for the lyrics, to say, "There's a song in the air, there's a star in the sky," it's a song speaking of a different song, then incongruously pointing randomly to the sky. It sounds like it was written with the express purpose of unsettling people. Then we're suddenly back on earth with some unspecified mother in prayer and a baby crying. They're both moving their lips, to me a disconcerting picture. But it's the third line, seriously, that really sends me over the edge, giving the full measure of revulsion, a star "raining fire" while some group of "beautiful" sing.

That's always made me nauseous, a star spitting and sputtering, raining, drenching the world with fire, and these weird "beautiful" singing. Bleh! It took me some time to realize it meant angels. If you mean angels, say angels. I got stuck on the bizarre imagery of the spewing star and the "beautiful" firebugs. It sounds devilish, demonic! Then it closes off with the line about the manger cradling a king, not itself a terrible line, but still horribly tainted by its surroundings. Plus, it's all so anonymous.

Now, lest you think this is just a hang-up of mine, ask yourself, why is this song so neglected? Why is it overlooked at Christmas, except, as I said, for fly-by-night pirate radio stations, whose only mission is to stir up trouble? "White Christmas" hasn't yet melted away. "Rudolph" every year still gets frequent flier miles. And all the rest. All except the dreaded "There's a Star in the Sky." It's kept out like a black sheep, totally excluded. No one likes it. No one wants it. It's the redheaded stepchild of music...

I'm really sorry for writing all this. Because I know it must have made you sick. Still, doesn't it seem like there should be some sort of statement, at least for the record of history, as to the place in the world of this one miserable song, so understandably neglected and rejected?
Posted by dbkundalini at 6:06 AM