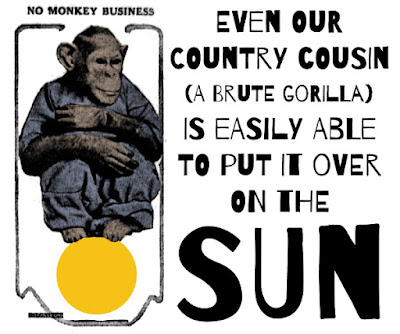 I got on this kick against the sun a few years ago, after a friend and I were airing our grievances about life. He thought he was big and tough because he personally hated nearly everything, asparagus, broccoli, elephants, and pinochle. At that time I had a few of the ordinary grievances to match him -- decks of cards missing the jokers, squash, reruns, and anyone named Lipfshitz. There's something wrong there.

In terms of who hated stuff the most, it was fairly even. Till I pulled out the wildcard, which was, "Despite our many years of deep, warm friendship -- we've been there for each other through thick and thin, good times and bad, trouble and blessing -- I've come to a conclusion that I feel it's safe to announce -- to confess, if you will -- that I think YOU suck, and probably always have. We became 'friends,' of a sort. But there was always something about you that stuck in my craw. Now I've dislodged it and can tell you without further explanation or equivocation, that, as of this moment (and probably at some level for the whole time I've known you), I hate you." He took back his little stack of DVDs, he dropped off my pup tent, and that's been it. Giving me another reason to despise squash, because it's his favorite food -- his mom still makes her old recipe on his birthday, I've heard.

After I lost his friendship, you could say I spiraled out of control. Like a pinball in a pinball machine -- that's an accurate image -- I bounced from one thing to another, never able to settle on any one thing. With a hatred of life in general so vast, so profound, so definitely spelled out that even the sight-deprived could read it clearly. There were interventions, attempted, all of which I rejected, by then acting in complete spite, but digging my own ditch deeper and deeper yet, till I was so deep and alone all I could glimpse was sunlight itself. Showing nothing, illuminating nothing, except the walls of that trench, or ditch, if you will.

There in the ditch, trench, or pit -- it was sort of like the pictures you see from World War I, men in a ditch, trench, pit, or hole. Doing whatever. Well, guess what. Looking at the sunlight, I came to hate it too. It'd pass overhead quickly, but slowly enough that I could shake my fist and essentially tell it it had low marks in my book. I'd see it in the summer months more, in the winter months not as much. It started my thought processes to make sense of it. What's supposedly 'bigger and badder' than the sun?; we've all heard that. But it couldn't hold its own against winter?

Now I had something bigger to hate, the stinking sun. And I let it know. In no uncertain terms. Don't get on my bad side or you'll live to regret it. Everyday I had another complaint. "You're the almighty sun, but you can't dispel a few clouds on earth?" "You're the sun, but what? You feel like burning us to a crisp? Well, the bigger they are, the harder they fall. And you've got a day of judgment a'coming, and we'll deal with you!"

Just think it over. You could probably add your own jibes against the sun. Did it burn you when you were a kid, when you didn't know any better? I remember one of my cousins getting such a sunburn, it was terrible. Then he told his parents that he'd had his shirt on all day. They couldn't figure out what happened, since he never lied, they thought. But his butt wasn't burnt at all. So they thought the cloth on his shirts must have been at fault. So they made all of his clothes out of underpants and threw away the others. He never burnt again. They hated the sun because of all the trouble it put them through. And my cousin was no fan of underpants, so he also hated the sun.

Anyway, back to me in my trench or gutter, whetting my appetite for insults when I perceived the sun was nearly overhead: "Somehow you also give night and day on Pluto, a totally worthless task since scientists tell us the chances of life on Pluto are less than one in a million!" I gave it a left jab, a right hook, insults literally to beat the band, and I kept right on punching -- usually connecting, sometimes flailing and missing -- until the sun got the message: "You no good, buster," and after that it quit coming around (Good!), and I've found I still have all the light I need with light bulbs, candles, and my phone.
Posted by dbkundalini at 8:20 PM No comments: 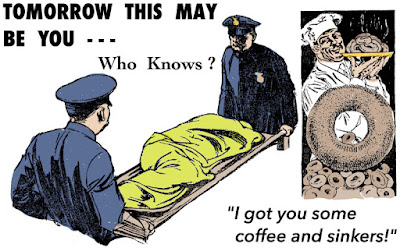 First responders, we all love them, as well we should. No one's saying we shouldn't. They took up a very dangerous career, most of them making that very brave choice of doing something dangerous. I guess I've heard some say they don't deserve our respect, which to me is weird, but the argument is if they chose something so dangerous, maybe there's something wrong with them. But the truth is, as I see it, we should always give them the benefit of the doubt, because maybe they chose it out of a desire to help others in need rather than a drive for fame, acclaim, and accolades. Where does the truth lie? -- perhaps somewhere in the middle -- so I'll move on with the oldest line in the editorial-writer's handbook, "We may never know."

Anyway, let us give first responders their due. They are great, period, end of sentence. Only to be out-shown and outdone by those who make treats, snacks, and refreshments for them. These are the guys I want to focus on. Because I know one, and I was there the day he put his life on the line for our first responders. It's not always the case that I can say I was there, but this time ... There I was. The biggest difference being the first responders had the advantage getting there thanks to sirens, flashing lights, honking their horn, in short, raising hell and taking the advantage. We got there shortly afterwards the old-fashioned way, dodging in and out of traffic and speeding like maniacs.

I still think of my experience that day when I see an ambulance going by. Just last night I was headed to Walmart, and here they come, a fire truck, police cars, a couple ambulances, various sergeant's cars or something, lights going willy-nilly crazy, headlights blinking, etc. I did the socially acceptable thing by pulling over. Because I buy into the old line, Every second counts. And the other line, The life you save may be your own, because let's face it, those guys are maniacs.

Anyway, I thought back to the time I was there, with a guy serving baked goods, donuts, pastries, etc., to the first responders on the scene. I'm at the bakery he works at, he gets the call and asks me if I want to tag along. He grabs a bunch of stuff they always have ready for these calls -- around 90 dozen donuts, cookies, and pastries -- and we whip the car into gear and head out. (Full disclosure: I ate about five total things on the way to the accident, so I can honestly say they were completely fit for eatin' on.)

We got there. Everything's a crazy mess, but the chief traffic officer sees us and waves us in. We jumped out and I pitched in where I could. But my buddy was in charge. I watched him something fierce, thinking, "He's so hot, shaking his little tush in such a self-important way as he buzzes from fireman to fireman, police officer to police officer, various EMTs, the sergeants (the biggest donut gluttons, if you want to know the truth), and the hangers-on. Naturally, he knew he was putting on a show for me, but still.

I was aghast listening to a newspaper man chewing the sergeant out about not getting to the scene fast enough. Because one dude died of internal injuries before they even arrived. But once it was too late for the victim -- let's call him Joe Schmo -- the chief was able to eat and enjoy a pastry, one of the ones with pecans. "It's too late for Schmo," Sergeant Schulz said, "but I need to keep my strength up for the others."

My self-important friend -- a good friend to have, someone in the baking business -- came in, announcing to the mass of sweating men, and a few ladies in jeans that fit real nice, "I got you some coffee and sinkers." That was so cool a thing to hear, sinkers being some kind of inside lingo for donuts. I've run it by friends since, and apparently I'm the last guy in the world to hear it. But I still use it, like if friends, family, or cousins are over for snacks.

The suffering at the scene was starting to mount. "Help me, Lord," I silently yet fervently prayed. I was almost overcome by the smell of blood and guts, until I refocused and honed in on the donuts and pastries. That truly had a calming effect on me. I was able to completely clear my head and get it together. I've always had a sweet tooth. That's no sin. "We've got another man down over here!" one officer cried in anguish. I glanced over and thought, More for me. Not that I was particularly that hungry; it's just something you think.

People died that day. The first guy, already mentioned. But others too. But I kept it together, telling myself, "Grandpa died, Grandma died, people die all the time, but today's not my day. This is my day to make myself useful -- checking out the cool first reponders, and getting in on these delicious pecan pastries and stuff. And free at that! "Get out of the way, sir!" one guy holding both ends of a stretcher with three victims on it barked at me. I literally jumped out of the way. Good grief, he about mowed me down with that damned stretcher, and I was holding a jelly-filled cream-puff, no less. But he did call me sir, so it's not like civilization had moved on.

Anyway, let's skim ahead to the end of the story. The various ambulances were loaded, the victims were carted off to Lord-knows-where. Then it came time for the final divvying. A few of the officers and attendants were loading up on baked goods. And because I had more time, I already had a stash started in the ditch, which I picked up just before we left. You gotta love the confusion at these things; it's great if you're naturally sneaky like me.

My hot friend came sashaying by, showing off, bragging how we were the first bakery on the scene, good for us! I gave him the thumbs-up, indicating our pride of place, which might not have happened if I wasn't there to tell him where to turn a couple times. We bonded over three glazed donuts, one and a half for each, over a shared cup of joe.
Posted by dbkundalini at 7:45 PM No comments: