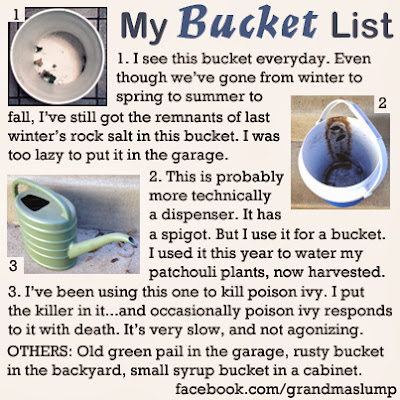 I was late to the party on the phrase "My Bucket List." Honestly, I never heard anyone saying it, then suddenly I heard it all the time. So unless it was a matter of spontaneous combustion -- and I don't think so -- people were already using the expression widely, then it suddenly hit me.

I watch "The Price is Right" and a bunch of the contestants say it was on their bucket list to be on the show. That's  how pervasive it is, and apparently how trivial it is. Not that it wouldn't be a terrific honor to be on the show. But you have to figure, they have a huge crowd, and only a handful of people can be contestants. I'm pitying the poor folks in the audience who don't make it, yet it is on their bucket list. O! To be that close!

(Just let me mention here, Drew Carey is the nicest guy on TV. He's a fantastic guy. I heard someone a few weeks ago bemoaning not having Bob Barker, and I'm like, "What?!" I seriously would not trade the nicest guy on TV for Bob F'in Barker! That's not on my bucket list!)

Anyway, the bucket list. My opinion of bucket lists is, Who cares? Whether you do something or don't do something before you die is a matter of little importance. Once you're dead, you're not going to be drifting around somewhere -- pure consciousness enclosed in the full reality of its source, let's say -- complaining that you didn't win a scooter and trip to Aruba on Price is Right!

And the same thing about whether you're able to see your great-great-great granddaughter graduate from college. It doesn't even slightly matter.
Posted by dbkundalini at 8:05 PM