Have A Mercy Mild Christmas To All 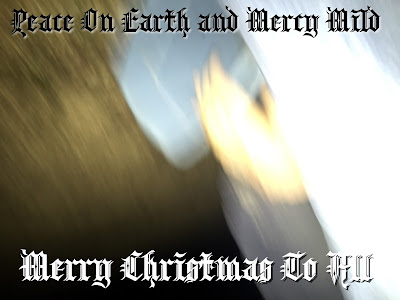 Hope you're having the best-ever Christmas season, etc., etc., that your Yule is bright, and all your wishes come true, and Santa doesn't have any trouble reading his list in a snow-laden sleigh that very well could ruin his computer system.

It's a great one for me so far, except I'm getting sick and tired of the Salvation Army bells everywhere I go. That coming from a guy who actually rang the bell one Christmas, now fairly far back, in the 2000s some time. I look at the current crop of Salvation Army ringers and wonder if they feel as uncomfortable as I did doing it, but none of them betrays the slightest reticence about it. And I'm one of the world's best readers of body language; if anyone feels remotely uncomfortable, my consciousness swoops in like a hawk and picks up on it. I saw a bell-ringer, I believe it was yesterday, who was even singing "White Christmas." It gave me the chills to think she'd put herself out like that, as though the bell itself isn't annoying enough. But of course it does a lot of good, presumably, that's what they say, but who can really tell? There's probably an annual report at the website.

The family has basically given up Christmas as a thing. Mom and Dad are of course passed on, which definitely saves money on gift-giving. I always had a hard time trying to think of something to give them every year. Then they died and that challenge was gone. Yes, I miss them something awful. There was a picture of them on the table today, how it got there I don't know. (I've been cleaning out boxes and it might've fluttered to the floor, then I picked it up -- let's say -- and didn't realize what it was.) Anyway, they're in their later teens. Dad's got glasses on, which he didn't usually wear. Mom's in a fancy dress, like maybe they were on their way to get married. I stared at it. Dad's staring at the camera, so I'm looking right into his eyes. Mom's looking to the side. I wouldn't know what to get them if they were alive. Maybe a tin of Topsy's popcorn.

I could go to church for Christmas. But don't think I will. It's almost better to celebrate the Blessed Story on your own and in your own way. When I read it and meditate by myself it doesn't sound as trite, not as much of a rerun. And really I am into it. I've got a whole system going of getting to the nub of everything in a holistic way. I'll keep the details to myself. The more I publicly explain it the worse it sounds. In which case I may as well go to church. (I love church, usually, but sometimes I don't as much.) I wouldn't mind going to a Catholic thing. Even though I'm not Catholic. The only reason I don't go to the Catholic church is because I'm not Catholic. Otherwise, I think it's cool, exciting, and profound. But probably one look at the priest thinking "This guy ain't Catholic" would do me in, and that'd be it. Last thing I'm ever going to do is take any kind of initiation. Am I right? Screw it. And I don't especially want to go to my own church. I've been through all the possibilities there, and for personal reasons I've been a lot on edge there. Yes, I know the objections to that kind of attitude.

About the picture above, that's my hand. I can't remember what I was doing, but it involved the camera on my phone. I somehow accidentally snapped a picture of my hand when I was taking a blue wastebasket out. I looked at it and thought it was inscrutable enough, it ought to be a Christmas-greeting picture. Something Hallmark would pay big bucks for, if I were money-grubbing enough to sell it. Let 'em take their own pictures, and leave me the heck alone.

OK, friends -- far and wide -- people who read this blog, people who used to read it but got sick of it and moved on -- Merry Christmas. Happy New Year. Other holidays that may exist, I respect your various greetings, too. And would say them to you if I knew them. Seems like there's something called Kwanzaa, which is something. Happy that. And Hanukkah, that means something very great. Happy that. If you're a native of somewhere and you have a tribal greeting, Merry that, Happy the other thing. Happy Holidays to those who are politically invested in exploiting the holiday bullshit ... I have no respect for that at all. Live and let live, leave well enough alone, eh? Happy Solstice, which was a few days ago, maybe ... I didn't hear a word about it this year. Hasn't the moon been dark lately? I don't usually look at the sky, but made the mistake of looking at it recently when there wasn't much to see. Merry Meet to all my Merry Meet friends. I recently bought a Porta-Potti, so Happy Holidays to other Thetford toilet owners. All the best to Catholics, those who go and love it and those like me who would love to go but hate to give priests the heeby-jeebies (See above).

I hate to bring this post to an end. But what else can I say to keep you dangling on the line? Most of you dropped off already. I'm happy, though. You be happy! OK? I'd love to be like Santa Claus, and come down your chimney and give you a big happy hug, or talk you into happiness, peace and harmony. But obviously that's not going to happen. Me out!
Posted by dbkundalini at 1:40 PM