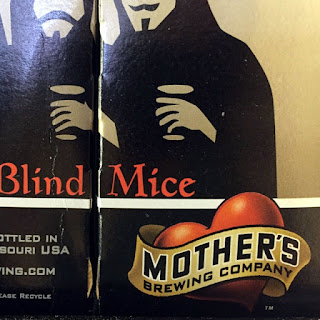 I was just inches from the Mother's Brewing Company's truck. Leading me to think, Everybody's gettin' in on the act! With their own brewing company, since beer is so extremely popular, and has been ever since they overturned Prohibition.

Beer was never popular at our place, though, growing up. The idea of my mother having her own brewing company would be ridiculous. She hated even the existence of beer and never had a good thing to say about it. Grandpa was a mean guy when he was drinking, and Mom said he used to keep a bottle stashed in the outhouse and she'd pee in it occasionally. Which might've been what made him mean. I'd be mean, too, if someone pissed in my hootch...

But mothers aren't all equally made. Of course there's mothers who are up for anything. Which has to be the story behind this mother starting her own brewing company.  But can she stand the competition? Does she even foresee it? From father and the children.

That's the set-up. We now have a scene where mother walks into the room and says she's got her own brewing company, Now we're all set. But father isn't one to be shut out, since he's the man and thinks he's in charge; I've got the damned schlong and it'll be a schlong damned time before you get the best of me! He walks into the room and says he's got his own brewing company, too, Father's Brewing Company. Bold move, especially when he announces, Now we're all set, our family's complete. Because that only rankles the kids, who immediately get together with their pals -- the boy's club and the girl's little clutch of friends. The kids step into the room and announce they've also started breweries, the Son's Brewing Company and the Daughter's Brewing Company. Now, at long last, the family is complete. Everyone's got something they're in charge of.

I like this part. To me this is where it gets interesting. Because it shows it's basically endless. No sooner does it pass the lips of the girl that "Everything's complete" when through a series of doors come Grandma and Grandpa. Who announce that they also now have brewing companies of their own, or the intention to start them. Being shortsighted, however, through the same set of doors appear their parents, older Grandma and Grandpa, with older Grandpa cackling, "Don't put the cart in front of the horse; you're not putting one over on us!" Brewing companies for one, brewing companies for all!

OK, it goes on like that, even older Grandmas and Grandpas popping in from the afterlife, each generation looking worse than the one before. Until, when you get back too far the degeneration into corpse soup is so pronounced that someone just opens the door and flings in a bucket of slop. It's about there that the generations' desire to have their own brewing companies comes to an end.
Posted by dbkundalini at 9:57 AM No comments: