I Can Tie My Own Shoes 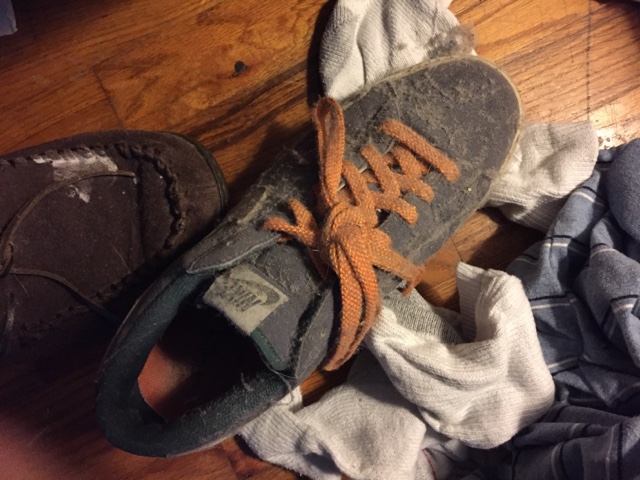 Some of my handiwork

As I get older, I've been more appreciative of the lessons of the past that really "took." I'm the first to admit that I didn't learn everything they taught. It probably wouldn't be too far off the mark to say, in fact, that most of it ("whoosh!") ... went over my head. Even so, I can balance my checking account, change channels on the TV, and sit up and take nourishment. Life is good.

Everyday I get out of bed. And my dog Roughage is sleeping in the crate by my dresser. Because I want her to stay asleep -- which she usually does -- I dress in the dark. Which is harder than it sounds, because with the least lack of attention I'll get my shirt on backwards. Every time that happens, say I need to reach to get my phone, it looks like I'm scratching my armpits. Embarrassing when someone sees.

Part of dressing is putting on your shoes and tying them. OK, so there I am in the dark, literally tying my shoes without seeing them. It's amazing, but the lesson learned in school of tying my shoes really "took," since I can do it without the slightest difficulty. At least you'd have to admit they're tied good enough for a guy to pad around the house in the early morning hours, although, I'd still claim it's a good enough job even for public display!

In the photo, I believe that's a shoe I bought once when I was on an exercise kick. I seem to recall it was a Tuesday, after a long weekend of eating myself sick (probably a holiday), and resolving, "I'm gonna die if I don't do something." I bought the shoes secondhand, and who knew they had shoelaces long enough to make a sturdy noose. So I had to double-tie them. You can see the lump in the middle is twice the normal girth. Which I never actually learned, but I was still able to improvise and accomplish it.

My usual shoes, which I have on my feet even now, are tied in the classic single tie manner. I'm not tooting my own horn -- not much, anyway - but they're tied beautifully! And all done in the dark, again, so as not to disturb Roughage in her dreams. With me thinking, literally as they're being tied, "Wow! I"m very good at this! They taught me, perhaps someone said I'd never get it, I don't know ... But I did!"

I don't know what else to say about it, except maybe just to repeat as sincerely as I can, I'm not bragging, that's not what this is about. Maybe I'm encouraging someone. Say you're someone who had trouble learning, and now you wear only slip-ons, and you're afraid someone will find out your secret, that you just didn't get it about the shoelaces. The encouragement would be -- it'd about have to be this -- that you'd figure out how to tie your own shoes, too, and do it completely on your own. It doesn't have to be in the dark, unless you want your dog to stay in bed.
Posted by dbkundalini at 10:47 AM No comments: