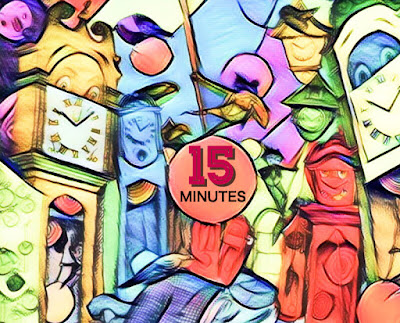 I'm in a quandary, a mental quagmire. O this wretched existence! Hast thou no mercy, inexorable Fate? Inexorable is right, whoever first said that.

As I've stewed over this post, driven to it really by a kind of cruel desperation, I've felt a dreadful range of emotions. All centered on one question, Why? And tangentially related to a second question: How? Why this burden of 15 minutes? And how can I escape it. I seriously don't think I can escape it. And that's not right, am I right?

We tend to look at it as a commonplace fact of life that we're all getting older. Certainly I can see that as well. When I look at old photographs of myself, it's like a different world, a different me. But I know it is me, and in some cases even have memories of the photo being taken. And other aspects of what it was to be in those circumstances long ago. Am I alone in this knowledge? I believe I'm not. Surely others -- if only a few others -- know what it was by way of vivid memories to live in the past. I can't be alone.

20 years, 10 years, 5 years, a few years, months, weeks, days, minutes, seconds. Leading me back to this dreadful question of 15 minutes. How can I cease aging for 15 minutes? Is there someone really good at math, or preferably time travel, who can clue me in to the mysterious answer of this? I'm not asking a lot, just to not age a single bit in 15 minutes. That's not such a huge request.

I'm looking for wisdom. This burden came on me just three or four units of 15 minutes ago. I called a man whose wisdom I respect. He answered me tentatively, not fully understanding the question, apparently. Everyone deals in "common sense," which I frankly get sick of. He did the same thing. "You can't quit aging for 15 minutes," he said, point blank, like my question was so much dirt under his feet, not even worth considering, and even stupid. I could tell I wasn't going to make much progress with him. Leaving me once again alone.

This came from my mind, OK? The only one who can answer it has to be me, an answer straight from the horse's mouth, as it were. A person could die, right? That takes away aging in regards to a conscious person all right. But your body still ages, with the mechanics of death even harsher for the body. Aging as well as putrefaction. Not good. Briefly, death doesn't help, because I still want my life to go on. For life to be prolonged.

If there's an answer, and it doesn't come physically, what's left but mental? That's where it has to be. Like in the phrase, "Think young." If I meditated, really stewed over it, say, for an hour, that for 15 minutes solid I was going to think young, then did it, I actually could mentally convince myself that I hadn't aged. Think so? Life as we know it is comprised of our thoughts. If that's true, it could be done.

AN HOUR AND 15 MINUTES LATER: OK, I'm back. The hour meditation itself seemed damned near to stop time. Then it was time for the 15 minutes. Which was a total failure. I simply couldn't get started. I kept checking the time, like the way I cook frozen pizzas; I never trust the instructions. I was checking the time, then diving back in, but all I could do by way of experience was fall prey to time's passage, a minute here, two minutes there, etc. I was so frustrated, 15 minutes passed like an instant, and I was 15 minutes older -- mentally and physically -- and worn out. What a failure I am!

The weird thing about this, totally unexpected, was the hour of meditation was great -- flew by! -- and I felt just as young going in as coming out. But the lesser period, 15 minutes, was like a kick in the pants. What I'm seeing is, If you prolong the time -- an hour or more -- you can stay forever young. But if you limit yourself to 15 minutes only, all you do is age. A weird, seemingly contradictory set of circumstances, I realize that much, but regardless, it appears to be the only way this can be done...
Posted by dbkundalini at 9:35 PM No comments: