The End Of My Imagination? 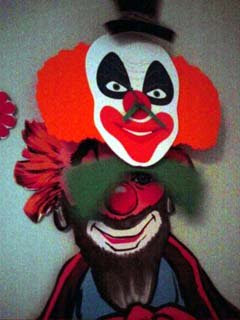 This is a tough one to write. I've wadded up and thrown away three false starts. I'm up pacing the floor.

I look at my clock clown above my desk, hung on top of my other clown, and see the time is speeding by. The ticking sounds loud. I was in the other room and thought I heard the constant drip drip drip of water somewhere. It turned out to be the clown clock making noise right through the wall. It's maddening and not helping a bit.

Have I reached the end of my imagination? It feels shot, spent, wasted, drained, annihilated, and obliterated. I could continue to do sociological and psychological analysis on my Skidrow obsession. But there's only so far that takes me. This is like a microbiologist looking at fleas in a microscope everyday. They're definitely worth looking at but not everyday.

I'm a little bummed out that I had to see Skidrow crumbling and dissolving. As much as I hate Skidrow on one level, it was actually nice to have it there. I can even envision Skidrow being cleaned up and becoming a tourist attraction. With big plywood pictures of some of its characters and a hole where tourist kids can stick their heads through. Make it fun. But think about it, there's the Skidrow type of person, and he or she would just end up somewhere else to make a new Skidrow, one that the tourists would avoid.

It takes a special kind of brazen person to actually go to Skidrow. And it takes a really creepy person to make it his permanent hangout. But for all that, you want it to be there. It's something you know about. It's something that everyone knows about and likes to peek at. I seriously don't know anyone who is truly disgusted about Skidrow at some level.

Now that I think of it, why was I so bummed out just because my imagination had the place crumbling and dissolving? I think I got reality and fantasy mixed up! That's weird. But if anyone should know better, it'd have to be me, since I was the person doing the imagining! It does exist! I don't have to imagine it crumbling and dissolving! I can imagine it any old way I want! I can back up and see it not only still there, but thriving! How wonderful! It lives that I may peek another day!

The woman at the end of the bar. She never existed, so she's safe, not crumbled, not dissolved. The two guys playing pool. They don't exist, so they're safe. The same for the bartender. And the pizza guy. He's not the devil; he doesn't even exist. The bartender yet lives to mix drinks tomorrow and every day yet to come!

My imagination lives on! As good as ever!
Posted by dbkundalini at 4:15 AM