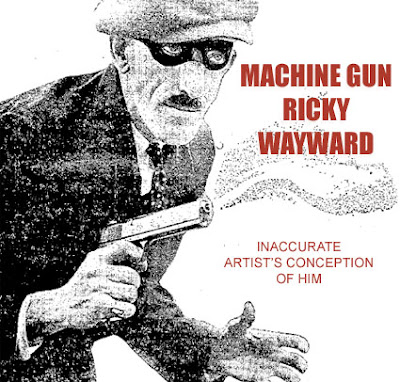 I'm advancing steadily in the organization. A few short weeks ago, when I started my life of crime, I was a abject nobody, passing my time in basic mischief, tipping garbage cans and slashing random screendoors. But then it all took off.

I worked my way up quickly. I took on the dirty jobs no one else wanted, like managing the organization's fly-by-night carpet racket. That taught me many valuable lessons, chiefly, that crime does pay. Even now, I picture a bunch of disappointed customers hauling worthless carpet to the curb, their furnace filters clogged from floating tufts of shag. To me, that's funny. The saps. It serves them right, trying to save money buying crap carpet!

Then things got dirty. I became the go-to guy for some of the worst hit-jobs, since I'm not in the least reticent to off the bastards. I figure, hey, they're criminals, what's the difference? I'm saving society the cost of expensive trials if they were caught, and the greater long-term expense of keeping them in prison. So I look at it as a public service. Admittedly, there's a touch of irony in my service, since I too am a criminal!

I might seriously worry about such ironies, at least back in my normal life. But I'm not worried about it now precisely because I am a criminal! We're beyond the normal rules of behavior, one, and I extend that to questions of logic and consistency. If I need to off someone who isn't a criminal, I'll also have a justification for that, or maybe I won't. ...

But this isn't a place to get into the philosophy of criminality. I haven't got time for it. I'm too busy looking out for myself and my future, which appears to be well in hand.

As an example of what I mean, I've been up to see the Boss of the Skidrow organization, the Skids. I've been in his sights, the good ones, not his gun's. He noticed me, and he likes what he sees. He has a nice hotel room on the square. He's got security. I had to walk by a ton of guys to get to his room. Once there, he offered me refreshments and patted me on the back.

He said he liked the cut of my jib, praised me for having moxy on the ball, and said I was the cat's meow. I agreed, having a lot of self confidence, saying when they made me they threw away the mold. Then I made his day by saying, "When they cracked open the nut of life, they looked down and saw me waving, the meat of the goodie." He had to laugh, which seemed clear I reminded him of himself. He stuck out his hand and said, "Call me Tony."

I said, "Tony, I know your time is valuable. What did you call me here for?"

Unexpectedly, he handed me a gun, and told me to aim it at him. I did, putting the bead right on the Katastha (or Ajna) chakra, right between the eyebrows. He said, "You could be Mr. Big, just like that."

I stood there with steely resolve, feeling a thrill right in that same area of my face, with my spiritual sight descending (in Tony's head) from that point in an arc to the medulla oblongata, then centering in the point between those two poles. Obviously Tony had never seen that kind of intensity. I call it Kundalini Whispering. I use it to keep my dog calm, but you can just as easily drive people crazy. Then as quick as a wink, I diverted the gun to the right and blew a light bulb out of its socket. Immediately, one of the security guys barged in, but Tony waved him off, saying nonchalantly, "Ricky saw a fly, that's all."

When the guy left, I said, "Ricky? My name isn't Ricky. It's not even in the Ricky family of words." But Tony said, "You're Ricky!" I said, "OK, I'm Ricky. Ricky what?" Then he said, apparently having given the matter some thought: "Machine Gun Ricky Wayward."

In short, I now had a cool name. Then he went on to explain to me, I was the new man in charge of the organization's "modeling agencies," "massage parlors," and "escort services." Maybe you know it better as prostitution, the skin trade, the old pokeroo for money business.
Posted by dbkundalini at 7:17 PM