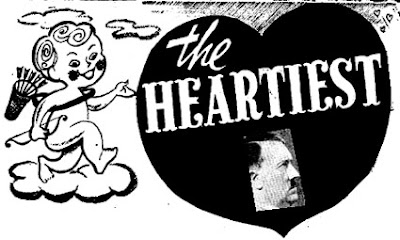 If you like Valentine's Day on February 14, enjoy it while you can. Because I see a day coming -- and the way the world is going, with lots of hatred, etc. -- when everything might change!

The problem, like I said, is hatred and love together. They're getting mixed up. Or maybe it's always been that way, but people have been too dishonest to say so. They certainly don't love one another. They don't even like one another. It's sad but unfortunately very true. Not everyone, but many.

OK, Valentine's Day, Febuary 14, is a day for telling your supposed love one how you really feel. But, according to the new honesty, you might say, "I really don't love you. It's all been a sham." It's harsh, I agree, but the advantage of saying it on Valentine's Day is that the general spirit of the day, a day of love, cushions the blow. She or he thinks, Maybe it's a fluke, maybe it's a joke. But, no, it's no joke, as you reiterate the negative sentiment, with finally a torrent of hate-filled invective pouring forth from your mouth, by now a non-stop stream of poison.

You can see what would happen if enough people did that -- and they're aching to, for sure. It wouldn't take long until the cushioning effect in general was worn away, because the day would be known for so many break-ups. By then, the spirit of the day would have changed entirely. It would become a day known for domestic crimes, murders, harshness, people flipping each other the finger, and so forth. If it happens it will give the phrase "St. Valentine's Day Massacre" a whole new meaning!

Eventually, then, the day being completely ruined for love and becoming a day representing total hate, those who still want a day for love will cast wide (and fervently) for another day. But what other day is there? They're all basically occupied by something, and you can't have too many holidays right in a row. You need a buffer space so each holiday can have its own niche. Certainly the adherents of other holidays won't want to yield to the orphaned idea of a day of love. Christmas? Arbor Day? Columbus Day? Never! So there will be troubles all the way around.

Then someone will think, what about Hitler's birthday? That's a date, April 20, that's long been more or less kicked off the calendar. I know when the day comes around, there's a lot of hushed tones. Everyone goes, "It's Hitler's birthday, damn it!" No one calls in sick because they want an appointment with the many therapists out in force that day, counseling those who have terrible issues with Hitler. So they decide, Why not rehabilitate Hitler's birthday? It's not good for anything anyway. We could have Valentine's Day then!

In fact, it's perfect! It's long been known for the hatred of its namesake! Why not claim it as the day of love, and completely turn it around? With the hearts and candies and everything that we used to associate with Feb. 14 simply transferred over. I know, it's close to when Easter sometimes is. But Easter, being a nomadic holiday, is always going to be in the way until it finally settles on when it wants to be.

So that's it. That's the future. It sucks, yes, to have to change. If everyone decides to keep Valentine's Day a day for love -- and drop the honesty business -- then maybe we can avert this alternate future. But if you actually do feel like pouring out your true feelings -- I hate you, darling -- then just know we have a fallback date for the true lovers.

Now it's known as Hitler's birthday -- BOO! -- but it wouldn't take much to make it a day of love!
Posted by dbkundalini at 7:36 AM