Good News -- You're Being Blackmailed 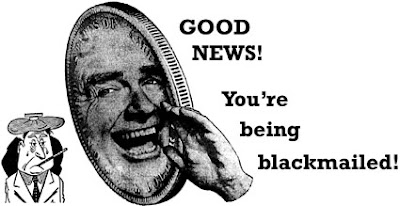 We all know what blackmail is. You've had a little bit of fun, then, wham, someone blackmails you. Then it's time to pay. Of course you're all nervous when the call comes. "What?" you tremble, knowing if you pay, that won't be the end of it. The guy gives his instructions, you're in terror, but you can't realistically do anything but pay.

Some of our regulars were at the hotel this afternoon, not for the hookers, but just sitting in the lounge having coffee. In my place as the head of the Organization's prostitution operation, I have a bank of TVs to keep track of people's comings and goings, no pun intended. I saw among them a couple of the ones who said one of their fetishes was wanting "the danger" of being blackmailed.

Of course I like to make people happy. That's the business I'm in. So I thought I'd play around with this one guy, a guy named Rutledge. He's the kind of guy who would probably scare easily. And who knows how happy that might make him!

I dialed his number and watched as he answered the phone. "Mr. Rutledge," I said calmly, disguising my voice, "don't hang up..." He goes, "Who is this? What do you want?"

"What-do-I-want?" I repeated, adding a menacing chuckle. "You tell me ... You've been a very bad boy. I've been watching you." He sounded like he was getting sick. "What's this all about?" I just chuckled again, like a cat with a mouse, then said, "You know what it's about, you being a very bad boy."

In the give and take, definitely fevered at his end, I finally described the monetary payment I would need "to keep my big yap shut" and where he should make the drop. Of course I added a few snarling remarks about "What a terrible pity" it'd be for his wife to find out, especially considering all the child support he'd be liable for, with eight kids. "That'd wipe me out," he complained, to which I only replied, "I know."

He wanted to meet me face to face. It was a confused conversation because in there somewhere he started thinking maybe it was me. "Is this you, Ricky? Is this what we were just talking about?" I expressed that I didn't know anyone named Ricky. Probably more unbelievably, in spite of Ricky Ricardo and Ricky Nelson being famous Rickys, I said I'd never even heard the name before. Before he could interrupt, I cleared my throat.

"Mr. Rutledge,"  I said, "The plain truth is, I know where you go, and I know what you do there. And if you don't do exactly as I tell you, I will be sharing some very interesting facts with your lovely wife..."

"OK, dammit to hell," he blustered, "what do you want?" I explained a complicated procedure that he must perform. He should put $300 in small unmarked bills in a package, come to the hotel, catch a taxi to a particular corner, walk to a mailbox, take another taxi from there to where he started from, walk to a fire hydrant, catch a taxi back to the same particular corner, clap three times, and catch a taxi back to where he started. Then he would re-enter to the hotel and say to the receptionis, "Give this package to Mr. X when he arrives."

I could see in the monitor he was sweating a rainforest. But he was relieved, it appeared, that it was only $300. Could he be so fortunate? I brought him back to earth with a dispiriting promise, "I'll talk to you again ... next week!"

UPDATE: Rutledge did exactly as I commanded. Later, I called him up to my office and gave him back his money. He was pleasantly surprised and said, "Don't ever do that again!" and was totally relieved. I was laughing my ass off and asked how he liked it, since it was his fetish. He laughed, too, and said, "Not as much!"
Posted by dbkundalini at 7:34 PM