I Have Johns Begging To Be Blackmailed 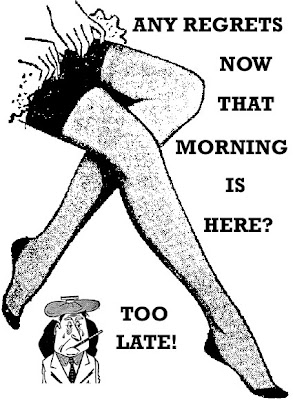 I was just saying "Forbidden fruit is sweetest." With my psychological background and my skills in human environmental science, of course I knew I was playing with dynamite, but the reaction of some of the guys was still nothing short of amazing.

It's amazing all by itself that I, raised to be a moralizing prude, should have such a mastery in running an upscale brothel, the entire prostitution operation of the Organization! But there's no disputing my success, as I have in just a few days doubled our clientele, and there's no end in sight. Certainly the girls are happy. No more sitting around being bored. And the guys -- WOW! -- it's like a little community. Tons of thrills and camaraderie to boot!

The key to their happiness, believe it or not, is the increased danger of getting caught. Which makes a lot of sense. Because if "forbidden" fruit is sweetest, the sweetness has to be even sweeter with this added element, the fact that your wife could storm in at any moment with a hatchet. In my opinion, this is really something to exploit, since keeping people happy is among my priorities.

OK, I said it's like a little community with the guys. They're down the hall doing their thing, proudly. Then they're coming back to my room to brag about it. And they kind of like it that I'm a moralizing prude, not taking part in any of the festivities. (I wouldn't touch one of these girls if I drank a whole keg. That's just the way I am.) But if the other guys are happy, I'm happy.

So we're talking and one of them confesses a secret desire, or fetish, that he would enjoy the danger of being blackmailed. It's not that he actually wants to be blackmailed just-like-that. But he fantasizes about someone calling him anonymously and genuinely blackmailing him, just out of the blue. That's wild! I myself would hate being blackmailed, but this guy, then a few of the others said they wouldn't mind it at all! I should've thought that anyone desperate enough to sleep with hookers has to have other issues...

I'm amazed at this. I've got guys coming to me, more or less begging to be blackmailed, or something close to it. We kicked it around a while, then they started confessing a whole bunch of stuff -- past offenses, embezzlements, robberies, murders, affairs, failure to return library books, stealing at work, premarital sex, Oedipal complexes, poisoning Tylenol, sincere allegiances to Al Qaeda, watching Fox News, being moonshiners, bullying in school, dunking pigtails in inkwells, being part of the hackers group Anonymous, war crimes, having smoked marijuana in college, selling atomic secrets to the North Koreans, and downloading illegal MP3 files! And I seriously think they were holding back. Another couple days and I'll clear Oswald...

So it went on like that, and finally I had to wave them off. My office was like a confessional. But they persisted, working on the same idea, or some variation on it: That the more they spill, the more danger they're in. I had no choice but to give in. They've tasted the forbidden fruit of our honorable little establishment. And now I've got enough dope to hang them all! I'm busy taking down all this information on note cards and putting it in my files. Then they had me swear that if they do anything at all to offend me, that I must blackmail them. It's so weird to realize that I've got these desperate epicureans in the palm of my hand!

The terms of the various agreements are very loose. But I could definitely mess with their lives if I wanted! And I'm thinking, I would love to do some psychological experiments with eunuchs, you know, something in the field of group dynamics, one of my specialties -- if I only knew some. Eureka! The Organization has some shady doctors who'd be glad to help!
Posted by dbkundalini at 6:56 PM