DNA Tells The Truth -- Lassie Was A Collie! 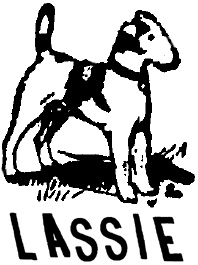 Thanks to my enrollment in an obedience school for dogs, and something of a happy accident as a result of my enrollment, I have finally been able to clear up a mystery that's kept the world guessing for decades: What was Lassie anyway? What kind of dog?

I grew up watching "Lassie," and I have to say, I always thought I knew dogs. But Lassie was a total mystery. In part -- and I believe this with all my heart -- it was a mystery encouraged and perpetuated by the producers of the show. They knew there would be more interest, more buzz, if they kept it up in the air and kept us guessing. We'd eagerly tune in looking for clues, while from the producers' point of view, we'd also be watching the ads, so they could rake in the big bucks.

Actually -- and this is the sad part -- it worked! The producers exploited a poor, innocent dog, feeding the sad creature table scraps, and it was lucky to get that, while they themselves rolled in piles of money and selfishly smoked big cigars, never once sharing them with their star. We the viewing public were so caught up in the mystery and fantasy, being so fascinated with Lassie, that, ironically, we bear some responsibility for the poor dog's fate.

As to our guilt, of course at this point we can't do anything about it. Just repent and hope we'll be more discerning the next time someone comes up with a dog show. But people are funny. I can see us falling for the same damned thing, for the most part because we're ignorant. And Hollywood's always got a razor up to our family jewels, and if we're not immediately discerning, then whoops, they're gone again!

Anyway, I've always heard over the years, after the general interest in the mystery died down, that there was still one entity that didn't let it go. And you might guess who that might be, the United States government, of course! There's more to this story. One, we all heard that Lassie was played by numerous dogs, anywhere between five and six separate dogs! I personally never believed it, trusting my eyes over the propaganda: Lassie always looked precisely the same. And, two, that Lassie was a male dog, although Timmy always called her "Girl." Who should we believe, Timmy, who was right there on the scene, or anonymous people very likely with their heads up their asses?

So let's say it was very clear that Lassie was just one dog and a female. This is where we can see the government at work. If there's five or six different Lassies, and if we can't trust an innocent child to know his own dog's sex, that's just the government trying to confuse the real issue: What kind of dog was Lassie?

OK, being recently enrolled at the obedience school, after the other dogs were all picked up and the schoolmarm, Mrs. Biscuit, left for the day, I stayed behind, hiding. In her office, the file cabinets were miraculously unlocked, where I found what I was looking for, a folder marked "Top Secret," with a strange code work: "LASSIE," which to me spelled, "PAYDIRT." This is it, the actual government file, cleverly hidden in an obscure obedience school file drawer, where no one (but me) might expect to find it!

Imagine how my fingers must have been trembling, with the convulsions working their way through my body like an earthquake, as I opened the file. And there it was! I won't go into great detail, except to say, yes, Lassie was only one dog and was female! With her death -- itself surrounded by mysterious circumstance -- she was taken to an Air Force lab near Dayton, Ohio, and there she lies today! Extensive DNA testing was performed on the remains, with one unmistakable, wonderful conclusion headlining all the others: Lassie was a collie! Oh my God, now I knew, a collie! Of course!

I got the hell out of the office, never to return, and I was frantic. What can I do? They'll catch and kill me! I need to get this report out to the world! I drove and drove all night, fighting to keep my eyes open, hoping the government wasn't trailing me. Finally, I ran out of gas right next to this computer that just happened to be set by the side of the road, where I'm typing up this report for the world and am about to hit PUBLISH.
Posted by dbkundalini at 8:13 AM