I'm Saying Horrible Rumors About You 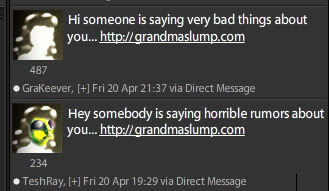 Hi. Glad you found your way to my site. You're probably here to check out the horrible rumors I've been saying about you. You've heard someone was saying very bad things about you. And so you were wondering, "Could it be true? Is there really some complete stranger on the internet, someone with absolutely no connection to me who might actually be spreading around crap about me, things I'd rather no one found out about?"

Well, it is true. I have been saying very bad things about you. And the worst of it is, I'm not through; I have tons more rumors to drop. It's not going to be good for you, that's for sure. Although, looking at it from the point of view of our aggrieved society, having put up with you for all these years -- and you've been insufferable -- getting the truth out there will be beneficial. You had what? -- about a million chances to make it right? Or was it more? I know you haven't exactly taken advantage of your opportunities. So now, the truth is out there.

I'm calling them "rumors," although you and I both know how it really is. You're guilty as hell, and I'm the guy who's got the goods on you. I tracked you down, I kept a laser-like focus on your comings and goings, I had other guys trailing your friends, we tapped your calls, and we have recordings. I even have printouts of all your private messages. And there's been a bunch, so far I've got eight standard file cabinets stuffed full. Office Depot's on their way with a ninth as we speak.

A great question would be, "Why'd you do it?" And by it, I mean the full complement of things you did. Did you think no one would notice? Did you think that you, of all people, could somehow get away with it? The first few times, even I wasn't paying that close of attention. But when a pattern emerges, that's when I perk up. I started looking. Then, by God, you did it again! And again! At first, I'm standing there with a newspaper up. Finally, you were so oblivious to observation, I stood there in the open, very conspicuous, as you drove by, totally clueless.

"OK," you're wondering, "Does this guy really have the goods on me, to the point that he's tweeting me about it? And what does he want?" Yes, I do have the goods on you. And not only in some kind of rough outline, I've got it all charted out, mapped, pinpointed as to times, your arrivals and departures, who was with you, what kind of damage you did, everything from who was using condoms to where the bodies were eventually dumped. Sleazy stuff.

Now you know I've actually got the goods on you! Because if I know that much, the way it all started all the way up to its tragic end, what's the likelihood that I missed any of the middle stuff? Let me quickly say, I didn't miss a thing! I've got it all, and you are busted, as busted as any perp can be! All it'd take from me is one telephone call and a transferal of a few select documents -- remember the picture of the girl with the big sunflower tattooed on her left boob? -- and you'd be looking at -- what? -- a life sentence? Parole in 90 years? Sharing a cell with Manson?

This is great! Great for me, that is. So what do I want? Hmm, what makes you think I want something? Maybe all I want is justice. Stranger things have happened. Or it could be that I do want something. But what that might be, I'm not going to say just now ... I want to wait a little and see what it's worth to you. But, please, don't insult me by bidding low ... oh no, you wouldn't want to do that!

I'll be in touch.
Posted by dbkundalini at 1:52 PM