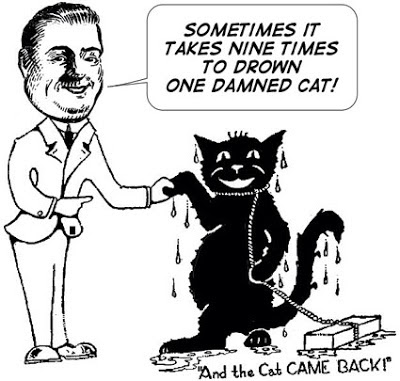 Have you ever noticed how it's a lot of fun to have pets ... for a few days? Then, next thing you know, they're wetting and soiling everywhere and getting sick? And they don't seem to have any sense, and they have trouble fitting into your routine? It's just not worth it!

If you live in the country, of course, you can easily dispatch them. I was visiting my uncle and aunt out in the country one time. They weren't home, but they gave me strict instructions to protect their bantam chickens at all cost. So you can well imagine how horrified I was when I looked out the back window and saw a bunch of chicken feet and beaks laying in the yard, no bodies! I looked again and there were two coyotes over by the fence. This is where it got hairy.

I got my uncle's gun over by the door, which fortunately he always kept loaded, and crept out the front door and sneaked around the house. Coyotes must have a sixth sense, because they heard me coming. (Crows are also notorious for knowing when you want to kill them.) They took off running before I got off a shot. Next thing, we were running south on the gravel road, me shooting like crazy, they dodging my bullets with fine aplomb.

The next thing that happened, I wasn't expecting at all. The coyotes veered off left into some guy's yard and headed for the back. I kept going, but since I was in someone's yard, I wasn't firing. Suddenly, I heard gunshots as I got toward the back of the house, and figured the guy was shooting the coyotes. But he wasn't, he was killing cats. Somehow he had accrued a back yard full of pesky cats! Somehow through unrestricted breeding they had grown into a full blown infestation.

That's the country. Living in town, your options are limited. Birds can fly away, fish and gators can go down the toilet, and I hesitate to say what can happen to hamsters, gerbils, mice, and other creeping things, what with the politically correct, bleeding heart, so-called morality police when it comes to animal rights. And even I agree, burying alive is inhumane. But to the morality police, I have a question, would you feel the same way if a crazed lion ate your newborn baby? Or a wild boar rooted around and messed up fresh concrete?

Really, though, the issue should be, Why do we want pets in the first place? They do nothing but mess up your life. You can't go anywhere or do anything without giving some thought about the damage they'll do to your home. Every time you see some cat woman on TV you know what the basic problem is. She's living in filth and feces out of some crazy obsession. And it all started when she got the first cat. It didn't do her a bit of good, and no amount of argument can convince me otherwise.

I saw a guy on the elevator at the hospital the other day. He had a little dog under his arm, which he proudly announced to me and the other passengers was blind. Obviously I'm thinking, What's a guy doing bringing a blind dog into a hospital elevator? It's blind, not lame. It can take the stairs like all the other pets. Especially if it has a guy trained to carry it.

You know as well as I, we humans are the only species dumb enough to keep pets. Really, think about it. This little blind dog doesn't have two kittens at home. Your cats don't have pet mice. Animals don't buy other animals at the pet store. Or, to make it real crazy, animals don't have pet humans. Instead, they've learned to live more intelligently than we have, leaving the wild kingdom to itself, although they themselves are in a No Man's Land between the wild kingdom and our human civilization.

You might be saying, But don't you have pets? I do, I have one dog, my dog Underbrush. I've had her for about 14 years, and she's a good dog. But she's more than a pet, she serves me in a practical way. She's my food tester, so no one poisons me. But it's not like it's that valuable a service. Because when she dies I'm going to have to test my own damned food.
Posted by dbkundalini at 3:11 PM