Krishna to the Rescue! 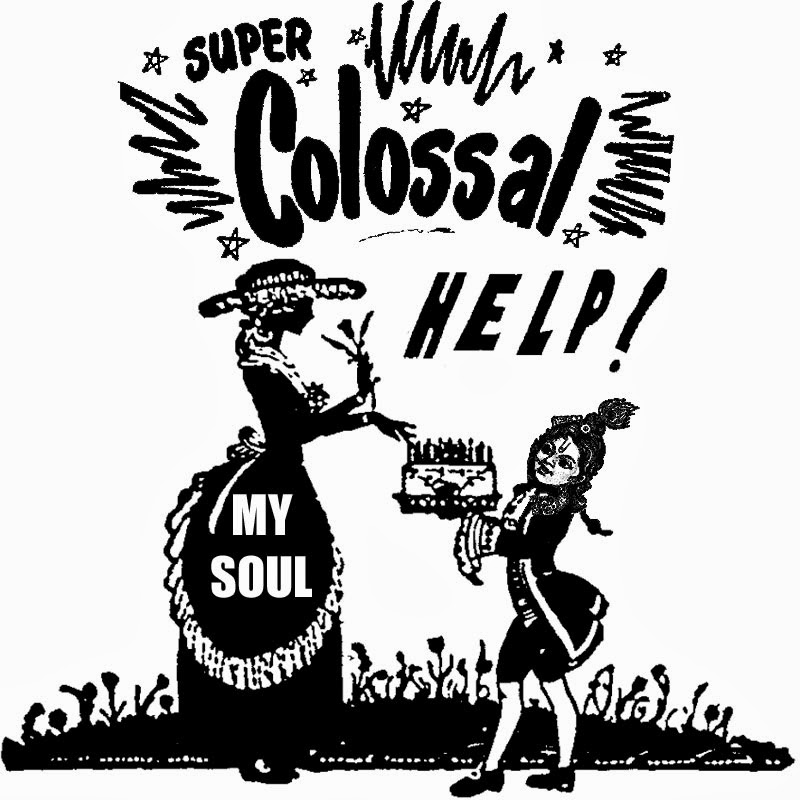 I had a terrible hard day's night last night at a church meeting. This one lady -- generally a real peach -- must've been having a tough time of it. Because she severely offended me. I was running through the list of things that I could do to retaliate: Smart off, walk out, scream, or throw something. But over the years I've mellowed, now knowing that to do any (or all) of these things is not wise; whereas I might feel great in the heat of the battle, it's tough to go back next time.

To me, that's one of the greatest lessons to learn. Life isn't a movie with a neat ending. In real life, there's always tomorrow, with your reputation on the line. And unless you're prepared to disappear to another city, state, or country, you're going to run into people at the grocery store, post office, or health club. "Hi, how ya doin', heh heh."

OK, I came home and did all the things you do in a situation like this. It preoccupied me. I thought of the Seinfeld episode where George thinks of what he should have said in an argument with a guy at work ("jerk store.") But I didn't just come up with one comeback but 40 or 50, none of which I could say in real life. As above, the problem is showing up next time.

Then it hit me, one of the oldest damned truths there is: If you're steaming mad, the only one you're hurting is yourself. So I did what I needed to do, reached for one of my many spiritual books, in this case the Bhagavad Gita. (A guy I used to know in Sunday School as kids, later when we were in college, "turned me on to" the Gita, as he called it, with Bhagavad apparently being something of an optional word.)

Really, Krishna is definitely one of the most understanding representations of God around. Am I right? He always seems to make just the right connection you need, whatever it is, since -- and most people don't know this -- he stands for your soul; there's no actual division. Hope I'm right about that. I probably am.

So thinking of this donnybrook last night, it was KRISHNA TO THE RESCUE! with this great verse:


One who works in devotion, who is a pure soul, and who controls his mind and senses, is dear to everyone, and everyone is dear to him. Though always working, such a man is never entangled. 5:7

That put it in immediate context for me. I'm dear to the lady, she's dear to me. It's just a matter of controlling our mind and senses.

There's been lots of times I've gotten help like that. Just to mention a few -- not to brag, but maybe they'll be useful to you, too, in similar circumstances. How many times have I been denied some transient pleasure? I'm not usually, but it's been known to happen. Once I was mowing the half acre -- with the old push mower, no motor, 100 degrees -- and I was daydreaming about the last piece of DQ birthday ice cream cake. I kept going. But my Cousin Roto was in the house taking a nap. I got done, and of course the cake was gone! KRISHNA TO THE RESCUE!


The thoughts of my pure devotees dwell in me, their lives are surrendered to me, and they derive great satisfaction and bliss enlightening one another and conversing about me. 10:9

Roto and I conversed about the cake and the Gita. He's kind of dumb, but I eventually convinced him we were deriving great satisfaction and sharing bliss. And because of the cake, that he'd shared more than I.

Another big problem I tend to have has to do with getting old. Sometimes I envy the animals; they either don't know they're going to die or they simply don't care. I had this dog "Fritz" (Link 1; Link 2) years ago who knew he was going to die; he dragged himself under the stairs, like he wanted to die where I wouldn't find him so I wouldn't be sad. Of course I found him right away and cried like a baby. KRISHNA TO THE RESCUE!


For the soul there is never birth nor death nor, having once been, does he ever cease to be. He is unborn, eternal, ever-existing, undying and primeval. He is not slain when the body is slain. 2:20

There's a million problems in the naked city. These are only a few. But for every problem you or I may have, don't forget, Krishna's always there for you in the Bhagavad Gita, ready to RESCUE you.