I was rereading my post about 9/11, some of the interesting things I had to say about birds and dogs, and it put me in a nostalgic frame of mind, making me test my knowledge of my own past, specifically what dogs and birds I've owned, or have been in the family.

I had my first dog when I was around 5 years old, and his name was Eggard. Other dogs in my family included Poohie (collie), Peanuts (beagle), Spoochie (collie), Bozo (beagle), Cinnamon (like a terrier), Frankie (collie), Fritz (sort of like a German shepherd), Zoi (Pomeranian mix). I'm probably leaving out a dog or two. Fritz only lived a week after we got him. We got him at a dog pound, then it turned out he had worms, and he crawled under the stairs outside and died. I cried like a baby carrying his big old body over to his grave.

I remember when Eggard died, too, and basically where we buried him, down by the fence, actually less than a quarter mile from the Slump residence here. (There was another family dog at that same time, my brother's, named Rats, and he ran away.) There were several dogs, then, that Grandpa and Grandma had, but they were mostly around when I was just a small kid, and I don't remember them ever having a dog after I was over 5 or 6. So I don't know their names.

As for birds, well, there were several birds that Grandma had, always parakeets, with names I can't recall. Kind of like "Perty Boy" kinds of names. I had a few birds over the years, a parakeet that was named Morgan Featherchild (ha ha). Then there was a finch family, a couple named Man and Woman, who hatched out two babies, Cakes and Wilson. Man, Woman, and Cakes all perished in the course of things, then Wilson lived for quite a while longer. He must have lived three or four years, because I know he was hatched out in 1988 or 1989, and he died on the 30th anniversary of John F. Kennedy's death, November 22, 1993.

Wilson was a fairly smart bird. I could take the lid of his cage across the room, stand up on the couch, hold the lid near the ceiling and call to him and he'd fly over and land on it. I don't know German, but we sometimes called him Der Vilsonfleiger, and one of the calls to him to come to the lid was, "Vilshy Mission!" He was friendly, would land on your shoulder, would play with a wooden egg I had, fight with pencil erasers being poked at him, bite at a piece of floss, try to stand on the floss, and that's about it. I said he died in 1993, and I still have (2008) some of his poop. I had a cassette shelf that was hooked on the wall, and he'd land up there. One day I was looking at it and there his poop still was, just spots of it! So I covered it with some paper so it wouldn't get wiped away, and there it is still to this day.

It's amazing how important national and international anniversaries (9/11) make you remember lots of other interesting things, too! 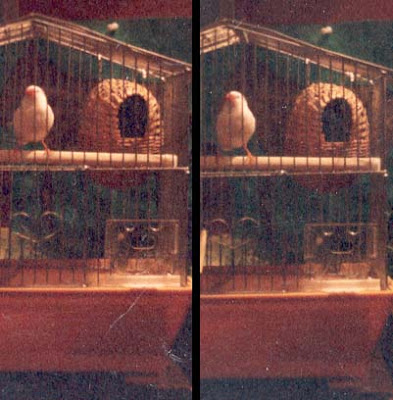 This is a stereo picture of Wilson in 1989. If you look at Wilson kind of crosseyed, and let the pictures drift together you can see a fuzzy 3D view of him.
Posted by dbkundalini at 4:14 AM