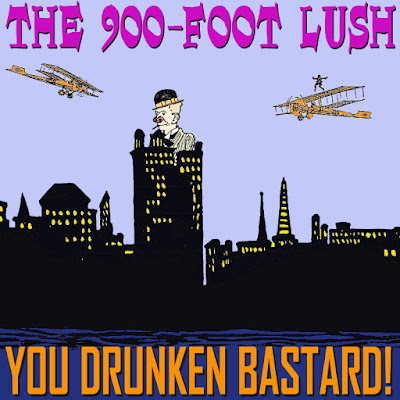 My staff greatly reduced after Dashing Danny's demise and Spud's degradation, I considered forgiving Tipsy and Cannibal. As idiots, surely they only followed the others when they had sex with The Lady. If I forgave them I'd still have a newsletter staff worthy of the name. But two minutes later I walked into the office and saw Tipsy lightly chucking The Lady under the chin and giggling like a drunken schoolboy. That's it!


I thought Stanley "Tipsy" White was a docile soul who couldn't be bothered with the concerns of our sober world. But he was truly focused on the best of both worlds, a little hooch here, a little hots there. And as for the newsletter, what could he contribute? The time of loveable lushes is past. No one's charmed now or open to the fun and frivolity of the lives of drunks. This is a newsletter for today, not 40 years ago. Tipsy doesn't fit in, he's got to go.

He came out of the garage to relieve himself in the yard, when I confronted him. "Taking a leak, Stan?" I said angrily, causing him to stop immediately. He was clearly concerned, because till then I'd been very gentle. "Go away!" he slurred, waving me off. I went berserk -- it was rage -- and belittled him for his excessive drinking, his red nose, his staggering gate, and all the rest. I spat out, "Your place isn't here but the gutter!" I saw him as the last dregs of a bygone era, unworthy of even the succor of rotgut. Amazingly, he was OK with the stream of insults, but mentioning rotgut made it personal.

We confronted each other without coming to blows, just circling and snarling, glaring at each other. "I'm very disappointed in you," I spat. "I thought you believed in the newsletter." He was honest but full of bluster, "I never cared for your ... newsletter." He said it like it was a dirty word. "But one look at The Lady and I had to have her!" I responded through clenched teeth, "Tipsy, I hope you're clearheaded enough to understand what I'm about to tell you..." With that I charged in and let my fists do the talking. If his head was clouded by drink, it was double-clouded with the chaser.

Then, at once, inexplicably, as if by some kind of ancient warrior instinct, he ran to the far east end of my half acre and I ran to the west. We removed the shoes from our feet, knelt solemnly, and prayed to our ancestors. Then standing again, he pulled out the celestial conch Foster Brooks and blew it, its deafening call resounding as far as the east is from the west. I was shaken, but I also had a celestial conch, Lady Love, and sent its deafening call as far as the north is from the south. The din was so great, Tipsy dropped his conch and about a dozen small liquor bottles rattled in his vest, vibrating, and clattered to the ground. Then he sounded his conch even louder and I sounded mine louder yet, with both combatants in this battle so shaken -- it's embarrassing to say -- that we ejected urine and excreta*. Of course Tipsy ejected mostly urine, with me providing the other and even making up what he'd lacked.

We then charged one other and struck with pummeling blows. "You're a guy who wants his kicks!" I cried, and spun in mid-air, kicking my way to glory. His head now matched his red nose. I saw my advantage and took it, pouring it on, violence begetting violence. Tipsy was on his hands and knees and appeared to be spent and was finally helpless. When, and this was a major moment, like the mighty sailor man reaching for spinach, he pulled out instead an extra-small bottle of hooch from an inner pocket -- this wasn't one of the standard brands, but something concocted by a distiller mage.

This is completely unbelievable, I know, but I swear (or affirm) every word is true. Tipsy swigged that small bottle down, which seriously might've been only 10 or 12 drops, and he was transformed. Everything about him was enlarged. He was vast in size! I looked up and beheld a 900-foot Tipsy White! The local airport threw up their hands. The National Guard was powerless. Even the local cop shop, always so ready to rumble, shrunk back. IT was loose! I had to do the responsible thing. I ran into the garage and secured The Lady, then returned to tangle with ... IT ... a big tipsy IT!

The colossus was making his way downtown, about to destroy the city. I climbed his foot and clutched a pant leg for dear life. Then I remembered the oldest saying known of drunkenness, "Hair of the dog." When he was busy enlarging he had dropped the tiny bottle of power and I had picked it up. But there was only one drop left, one and a half drops at the most. I shimmied down his ankles and to the foot, working my way nearer, ever nearer his big toe. As he stomped along I sweated it out, working my pocket knife, hacking a tiny puncture in his gigantic toe. Looking up, the water tower came into view. If he stomped the water tower both I and the city itself would be goners. I wasn't yet ready but I had to take my only chance, dripping that tiny drop and a half of power into the miniscule hole.

If this didn't work, frankly, there would be no tomorrow. It'd be all over. The Lady would be gone, my vengeance against Cannibal, and perhaps the world itself. But after a few tense seconds I heard and felt an enormous rumbling and roar. The air was sucked dry and there was nothing, then air from 100 miles away came rushing in. Later, I heard that hundreds of pimples in middle schools had popped themselves from the pressure drop and powerful reversal, so this was huge.

I craned my head and looked up toward Tipsy's face, past the clouds. The best I could make it out, I saw the look of fear, then simultaneous transformation. He shrunk so quickly, everything snapping around me, I certainly would have been crushed had I taken even one second longer to leap. As it was I ended up under his normal-size foot, just where I didn't want to be. The optics were embarrassing. Because who should come to my aid but The Lady Herself, bringing down an empty wine bottle on Tipsy's head, and I was freed.