When They Ring the Golden Bells 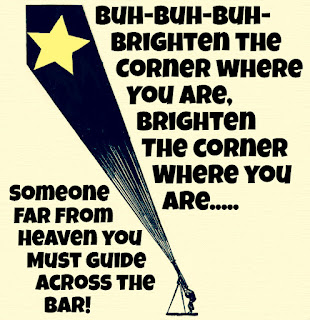 I'm getting very old, friends. I'm coming up on 65 as soon as my birthday rolls around, which in 2018 will be January 17. The older you get, if you're me, the more sentimental you get, and even weepy. I've heard of old guys going sentimentally crazy, and maybe I've thought that over so much I'm bringing it on subconsciously.

It doesn't help when people you know die. Just lost a cousin in the last week or so. And of course Mom and Dad, my grandparents, various friends, classmates, and pets have died over the years. It could be that I will live till 90. But will that be good? My life insurance guy called a couple months ago and assured me that he has my finances planned so I will have income till I'm 90. How about that? But since that's only 25 years from January, I have all new worries! Since the older you get, the faster time goes, 25 years in those terms is about a week and half. So in two measly weeks I'll be broke!

I've heard a lot of people on the internet say they don't appreciate hearing about religion. Frankly, I'm one of them, most of the time. The whole overly-sentimental approach to religion strikes me as bad. I'm not really leaning that way in my own practice. But I'm getting more sentimental. But here's how it works, I take a mystical approach to faith and have some gains in that pursuit. So every little thing -- a phrase, an old memory -- can trigger emotions or appreciation in that context, and, frankly, I about bust out bawling.

If you think back to your religious foundations, which for me was childhood, all those lessons are things I took to heart, and still have, filtering them through all my religious pursuits since. One of the songs that gets me is "When They Ring the Golden Bells." Savor verse 1:


There's a land beyond the river,
That we call the sweet forever,
And we only reach that shore by faith's decree;
One by one we'll gain the portals,
There to dwell with the immortals,
When they ring the golden bells for you and me.

Then there's another whole dimension to it that I haven't even mentioned, involving a guy's untimely death!

Yes, I used to go to a lot of revival services. My parents thought it was good for me. Maybe you heard the story of Brother Tolbert Victory. Well, I was there. I saw him die, and was with him when he heard the golden bells. The service ended. I had gone forward for prayer. Tolbert's hair was like a wet mop. He was delirious with the spirit, OK? Delirious. He told me, his lips touching my ear, that I'd do great things for the Lord. I didn't ask what. He seemed to shudder, like a man in vision. Like he looked ahead and saw me doing great things, but he also saw things out ahead that weren't so good.

He told me -- he was looking around, like he didn't want anyone to hear the inside scoop -- that these great old songs that we loved, including "Brighten the Corner Where You Are," "The Hallelujah Side," "The Old-Fashioned Meeting," and "When They Ring the Golden Bells," were being forgotten, or even attacked. Even though we'd just sung them! He said he wanted me to keep 'em going as long as I could, insofar as I had it in me, and if I had the sense of commitment to the task and the unction straight from the Lord to get it done. (I didn't have it entirely; I felt like, you know, Que Sera Sera, whatever will be will be. I was a realistic kid, but Victory was in such a fever I didn't poo-poo his spiritual burden.)

Then he said something I never thought I'd hear any man say. "If anything happens to me, this is all up to you!" Again, I was cool to the idea, not het up; I was a kid. A kid, I'm telling you. No man should lay that kind of grief on a kid. What was he talking about? I wasn't sure. But he sung for me the lyrics to the glorious last verse of "Golden Bells" and chorus:


When our days shall know their number,
When in death we sweetly slumber,
When the King commands the spirit to be free;
Nevermore with anguish laden,
We shall reach that lovely Aiden,
When they ring the golden bells for you and me.

Don't you hear the bells now ringing?
Don't you hear the angels singing?
'Tis the glory hallelujah Jubilee.
In that far-off sweet forever,
Just beyond the shining river,
When they ring the golden bells for you and me.

Brother Tolbert Victory exacted a solemn pledge from me, that I would be wary of the future and our rich spiritual heritage of the great songs. And if anything ever happened to him, that I would step forward in stolid vigilance in this regard. Which was extraordinarily hard in those pre-Spotify days.

OK, OK, I said, "If anything ever happens to you, fine, so let it be written, so let it be done. Six of one, half dozen of another. Lady Luck, don't fail me now. Hot-cha-cha-cha. Goodnight, Mrs. Calabash, wherever you are."

So I went to the basement for the post-revival refreshments, when literally five minutes later some kid comes running into the church, shrieking, screaming, that Brother Victory was hanging from one of the trees next to the driveway! We all rushed out -- my own orange soft drink being half spilled in the commotion -- to behold the lifeless body of that great man of God, unmistakably him, extra large brown baggy suit on a medium body, sweaty mop of hair and all.

They cut the man of God down and had everyone stand back. Maybe he could be revived. But it was no use. Brother Victory had reached that lovely Aiden. Unbelievable, I know, but every word is as good as gold. No one knew what to make of my own personal crazy response. I was beating on him -- this was before CPR -- and screaming, "I didn't think you would die in 5 minutes!" Now that I had taken an oath, etc.

Those years are way behind us now. It's been decades. I don't put much stock in the oaths we take when we're kids, or anytime really. "I'll be your best friend till the rivers all run dry," etc. Circumstances change. But I've done my best, nonetheless, which really isn't much. The songs haven't exactly been besieged by enemies. Occasionally there's a bad arrangement I haven't liked. But more or less, Brother Victory's fears about the songs was just paranoia. Religion's not under siege. When they tell you that, it's crazy talk. The churches are in large part spiritually bereft, yes, but there's more sociology involved there than willful sieges. It's laughable and something to cry for. Whited sepulchers aren't what they used to be, they're worse!

I started off above saying I get weepy, and that's all true. I was singing these songs today, driving along, trying not to bawl since I wasn't alone. And it took me back, way back, to that old church, and that night, and that great evangelist hanging in the tree. I can still see his body in my mind's eye. Dead as a door nail, yes, but his spirit already in that haven of tomorrow. What kind of joke was he playing, to get a promise from an impressionable kid like that, then to commit suicide without even going down for refreshments? The ladies made those things for our enjoyment. They weren't expecting the evangelist, of all people, to kill the revival.

The second verse is very good, refreshingly tear-jerking for me:

We shall know no sin nor sorrow,
In that haven of tomorrow,
When our barque shall sail beyond the silver sea;
We shall only know the blessing
Of our Father's sweet caressing,
When they ring the golden bells for you and me.

You mess with that song, brother, you're messing with me.
Posted by dbkundalini at 7:14 PM