The Crumpled Bird -- No One Shows Up 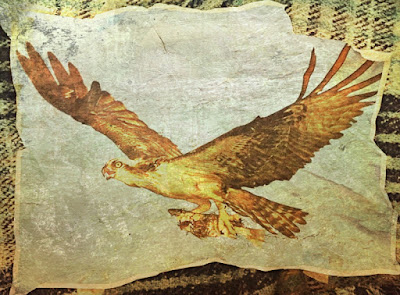 Anyone remember The Crumpled Bird? And how I so wonderfully vowed to Take the Plunge and do it, appear to those who were waiting and faithful. Well, it's still a thing. I had a little secret strategy in not mentioning it much, trying to sift the gold from the chaff. Not expecting, frankly, everyone to be chaff and no one gold.

The promise was, I would put up the Sign of the Crumpled Bird. Then overcome my general introversion and even disdain for being with people all-that-much. I would appear in public, to greet those who were faithful, watching the Sign for my appearing. And when I said I would "Take the Plunge," that's exactly what I intended to do, barring any change of mind or outright psychological refusal -- a complete shutdown -- that would prevent me.

Well, I had a plan. I would put the Sign of the Crumpled Bird up, then test everyone's resolve -- sifting, sifting, ever sifting -- I've been there more than a few times without revealing myself as the crowds looked at the Sign and wondered aloud about it. "Will he appear?" they asked, even asking me personally. Thinking, apparently, that I was a wise person who might know. I had a scarf up and covering the lower half of my face, looking very mysterious. Not a disguise, I should say, since no one knows what I look like. I've been careful to keep pictures of myself off the blog; I'm so mysterious, when I look in the mirror to comb my hair, I have to look twice to make sure it's me!

OK, so one day a few weeks ago, I put up the Sign, then got the hell out of there. I went around a couple blocks and came up as the crowds were looking at it. "Will he appear?" "He said he would." "I'd love to see the guy," one adoring hippie-chick said, a little young for me by about four decades. Still, my heart fluttered and I felt 18 for a couple seconds, before fainting and falling into a huge planter. They gathered around to see if I was OK. I waved them off. I pointed to the distance, and asked loudly, "Is that him!?" A guy was moving behind a car, and if I didn't know better, it could've been me. They took off that way and I ducked out the other way.

As days went on, the crowds thinned and interest seemed to wane; it definitely waned. We had a cold spell, and that kept them away. Then it rained, and no one wanted to come out. Then it actually got hot again, and more people were out, but by now the Sign of the Crumpled Bird was very weathered. Torn at the edges from the wind, holes in it from repeated flapping, the ink was fading from the rain and the sun, really looking like hell. Not the pristine poster I first printed on my printer, wasting, as it turned out, about $8 of precious toner.

I decided to leave it up. By now, though, it was simply out of defiance. You all haven't got the patience to wait for me, to gather around my sign and wait a few stinking weeks!? What's the world coming to? When I was a kid we used to wait forever; it was like a hobby, waiting, tarrying, abiding, watching the signs, watching the skies, really looking desperately for any sign that something somewhere might happen, which it never did. But did I give up? Not for a second!

Seriously, friends, it's no skin off my ass -- either cheek -- if you wait or don't wait. And I really blame modern conveniences like Google and whatnot. If you google "signs obscure writers heroes demigods," it seems like guys like me are a dime-a-dozen. We think we're Big Shit for having influential blogs and that anyone really cares. Well, a few do care. Like that hippie chick, whom I never saw again, although the whiff of patchouli I got from her hair that night sustains me. Yeah, we think we're Das Shitz, Megaturd, but the public is fickle.

Another week went by. They had hurricanes throughout the world, but none where I live. And the Sign remained up, although it had flapped in the breeze so much, it was hopelessly tattered, as you see in the photo. No one anywhere by then had confidence that I would show up. That old guy in the heavy coat, shifting from foot to foot in the cold, having to pee, that wasn't him, they thought. Just a guy waiting for him, when it was me. Awesome phenomenon, huh? The waitress across the road could be Christ and to us all she's good for is scooping pie.

I was bemused by the indignity I was suffering from lack of interest, then it rolled over into an actual angry fit. The town had some old wooden posts that held up a decaying shed behind one particular building. It was 4 in the morning one night and I went back there and kicked the posts so the shed collapsed, then I got the hell out of there. I came back the next day and the posts were cleaned up and everyone had moved on.

The Sign of the Crumpled Bird remained, very very crumpled, sad and sorry. And none of these bastard ingrates came out to see me! How you like that?
Posted by dbkundalini at 10:55 PM