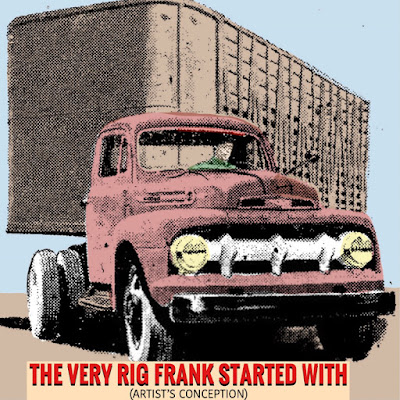 The last few days I’ve been looking at the interstate and wishing I’d been a truck driver. You have the open road everyday and you’re alone with your thoughts. The boss you have, he’s not breathing down your neck like some the ones I’ve known. You pick up a load, you take it somewhere, then move on.

I’ve been thinking about it since last weekend, when I went to a retirement party for three brothers, three truckers who recently retired, all the same time. They started out young, put their time in, and now someone else gets to haul the shipments, while they sit at home and tend the garden or whatever.

It was cute the way their kids had the place decorated, strictly a truck motif, with gas signs, rest stops, etc. I asked one of the guys, Frank, what he was going to miss the most about trucking. At first he said “Nothing!”, which got a good laugh, then he was serious for a moment about missing the open road everyday and being alone with his thoughts.

Ted also got some laughs when he said you don’t have the boss breathing down your neck all the time, with his boss sitting there at the retirement party, wagging a finger and laughing.

And Pete, basically zen, said, “You get your load, you move on, you arrive.” The way he put it really stuck with me.

We gathered around the cake and the daughters were slicing it and putting it on plates for the well-wishers. There were three sons of these guys, too, but only two of them were in town, with Frank Jr. himself being on the road, trucking. The two sons stuck close to their dads, like they were extra happy to have them home permanently. Probably because you can never be sure you’re going to see your dad again when he goes on a trip; our lives are always at risk; you could be driving along, suddenly come upon a stalled car over the next hill, and end up buying the farm. There’s always that, but you have to make a living, so on you go...

Before we dug into the cake, each of them took his turn to thank their families for putting up with them. Most of us had a hard time holding back tears. Frank brought us back to the fun when he told some of the blessings of trucking: “They had trucks when I started trucking, and there’s still trucks when I ended. Not every job can say that. Long live the truck!”

Ted had a few more things to say, then echoed Frank somewhat. “If I was starting out today, I wouldn’t do it any different. Not much has changed. We had trucks then, we have trucks now. Long live the truck.”

And Pete, a rough cut guy with tattoos, and that whole zen thing going, also echoed his beloved brothers, “Trucking is its own magic. Trucking is all-inclusive, with no opposite. It is filled with life and power and the ability to get goods where they need to be. Trucking will live a really, really long time.”

Amen! He ended on an optimistic note. And here's to all you guys on the open road today. As Aunt Alice used to say, "Cheers, dears!"
Posted by dbkundalini at 1:40 PM