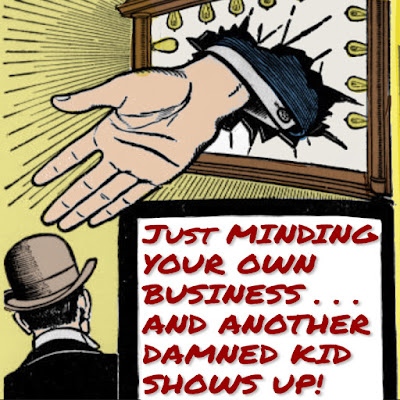 A guy told me the other day I was old, true story. It hit me hard, since I can’t see it in a mirror. And the guy’s a friend, whom I’ve backed up a bunch of times in the past, so I don’t think he’s lying. But he’s old, too.

His history’s an interesting one, which is coming out increasingly now that we have genetic testing and Facebook. A bunch of people looking for their roots with DNA have zeroed in on him as their actual father, and now they're trying to connect with him on Facebook. All this was a big surprise to his wife of 40+ years!

As for me, I’ve essentially been chaste over the years, so there’s zero kids showing up, and any that ever would would have to be frauds. In his case — I don’t know if his basic problem is the roving eye or simply the way his conscience shuts off after a couple beers — his claimants are not frauds. DNA’s a calling card you can’t deny.

So far he knows he has 56 secret kids. Several of these he’s known of for years, since a bunch of the women were from this area. Others aren’t known at all. But he's had hookups at Silage City for years. He and I used to camp at Silage Lake, and he was always going out for "midnight walks," leaving me alone in the tent with room to spread out.

“Why don't you use a rubber?” I'd ask when he confessed his walk had an amorous end. “It cramps my style,” he’d say, along with a bunch of other excuses about passion at its highest can’t be ruined. I have to say — brag a little about myself — my Sunday School upbringing saved me a lot, both on rubbers at the time and on newfound relatives of the engendered sort showing up unexpectedly. There aren’t any!

OK, as for his wife, naturally she’s pissed. If this doesn’t kill her, nothing will. So far she’s still alive, so now he’s stuck with her and her fabled bad temper forever. She might take the house if they split. But I don’t see an old guy and an old woman splitting up. They have too many accounts, Social Security, various insurance payments coming in in common to screw with it.

If she asks my opinion, I’m not going to back off my condemnation of Ralph for living a completely profligate way. Is he a nice guy? Yes. Is he a bastard? He can be, and more so than most. But should the wife be surprised? I don’t think so. She knows how horny he is and how he’d come home from a camping trip totally sated. Can’t tell me she wasn’t putting 2 + 2 together. Not suspecting me, of course; my morals are widely known throughout the Midwest. You see my license plate CHASTE and you know I'm much better than most.

I might have a talk with her. The best way to put big numbers in context and minimize them is to use bigger numbers. Yes, he fathered 56 children, but it wasn’t 156 or 256 or even 356. If he had 356 kids with other women, imagine how so completely horrendous that’d be compared to a minuscule 56. You have 356 kids, you may as well just go for 400. Or a complete ream, 500. That’d be sinful in anyone’s opinion. But impressive in terms of world records.

I’m glad his problems aren’t mine. The wife's always on his case, and all these kids are reaching out to him, even making a Facebook group, "The Known Children of Ralph B—". Chastity’s the best policy, if you can manage it.
Posted by dbkundalini at 11:05 AM