Out Drinking With Death 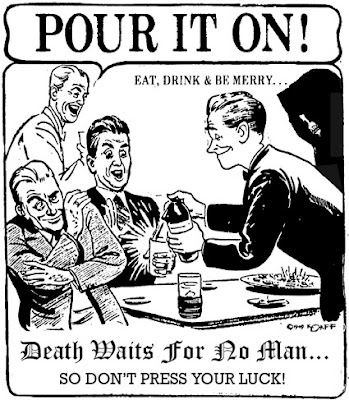 I'm very shaken up. It's weird, I'm usually so calm, but this is craziness hit crisis proportions. Can you really believe the price of drinks? I'm old -- I remember 25 cent draws and dime pitchers! So to say I'm aghast is an understatement; this goes way beyond that!

Why haven't I been out binge drinking in decades? you ask. I've never been that great at making friends. But now -- it's bizarre -- I got to know Death himself, and it's like we're inseparable. I hadn't seen him since the other day, when he guest-blogged on my site. Then he was suddenly gone, just vanished. Then this past Saturday, early afternoon, during breakfast, I noticed a black mist -- kind of dark in color -- taking shape at my table. There he was again.

Of course I asked, "What's up?" and he shrugged his shoulders. I had an immediate suspicion that he'd been out on his unique business, so I just said it, "Spill the beans." He put his hands up in mock surrender, as if to say, "You got me." In enumerating his deeds over the past couple days, he went on and on. For him it was a typical day, nursing homes, hospitals, alleys, schools, prison showers. He yawned, then perked up when he told me about an elephant sitting on a guy in the circus up in Minneapolis. I said, "How'd that happen?," genuinely curious, and he just smiled, "Must've slipped ... or something."

Anyway, now that we're friends, I suggested that we go out to one of the local watering holes and tip back a few. Even though I don't drink much, usually, it's proverbial that a few stiff drinks can wash your troubles away. Death looked at me like he was stunned, and then smiled, saying, "You know something? No one's ever asked me to go out like that, I appreciate it..." It's true, I'm an extremely nice guy.

We got to the bar and settled in with a couple beers. Then I had another beer and a whiskey chaser. He said, "Ah, a boilermaker." I said proudly, "Yup, that's the ticket." At least I thought it was the ticket till the barkeep told me the price of admission, very high; I was stunned.

Pretty soon, I was brought moderately back to reality when Death killed a guy for wasting seltzer water and hogging the bottle. The guy was out with his buddies, and apparently hadn't gotten the memo that such a thing was a mortal sin. I thought, "What? You just killed a guy?" but really what can you say when everything you say might be used against you? I chalked it up to "Better him than me," and proceeded to have another drink, and at these prices, it was shocking!

Well, you know me, drinks go right through me; the alcohol settles in my liver and I'm immediately drunk, but the remainder heads straight for the exit -- I had to pee. I was in the can, trying not to make eye contact, but still looking very interested at the graffiti. How do people have enough privacy to write such filthy things? "For a good time, call...blah blah blah." Shocking. And of course disgusting drawings of anatomically correct figures in flagrante delicto. It's all revolting, my senses were shocked. Just then I heard a scream.

I rushed out to see quite the row, screaming, shouting, some pushing their way to the doors, only to be pushed back by police on their way in. I thought, Just what I need, to be made a public spectacle in the company of these losers. But the spotlight wasn't so much on me as on two fresh corpses draped over the pool table, and Seltzer Guy. I glanced over at the bar and Death was still sitting there like nothing happened, nursing an overpriced drink. The police swarmed the place looking for the lowdown.

I said I'd been in the can when it all went down. I glanced over at Death to vouch for me but he had vanished. The police thought I looked shifty, I guess, so I answered a few questions. Did I have any idea what happened? I tried my best to beg off, till at long last, I blurted out, "It looks like Death got them!" I wasn't smarting off, but that's how they took it. I only managed to get them back on my side by complaining vociferously about the cost of drinks these days. One of the officers was about my age, and he also remembered with fondness the cheap drinks of yesteryear.

The guys from the County Morgue came and emptied the trash, at long last freeing up the pool table and seltzer bottle. I went home -- don't worry, Death drove -- but even being lubed as I was, I still couldn't stifle my loud disgust at today's prices. Yes, three guys were dead, but I bet those beers were three fifty a draw! It was a complete shock to my system.
Posted by dbkundalini at 1:02 PM