Get Your Degree in Violence 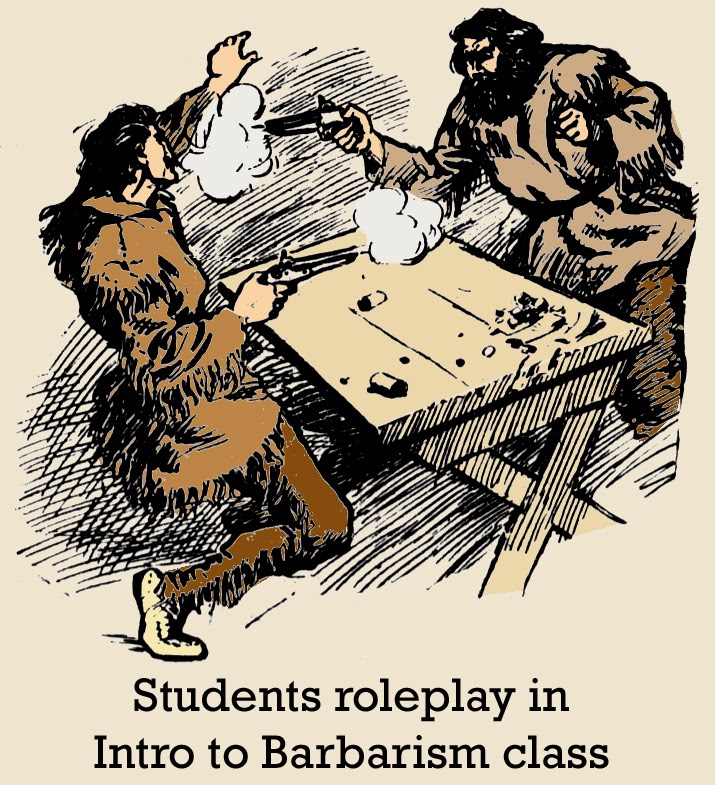 I've been watching the arc of history closely, keeping track of how things are going, and now with over 60 years of experience, it seems to me things are getting a lot worse in terms of societal violence, quite a bit worse. Either that, depending on how you look at it, or things are getting better, a lot better. Because of course there's lots of great opportunities for somebody no matter what happens.

I too can see some great opportunities. Gun sales, that's keeping a lot of folks employed. Then on a larger scale, we have defense contractors, who are always prosperous. There's plenty of opportunities to work in the military. And with guns here on the home front there's plenty of openings to teach folks how to shoot, gun safety, and, my favorite, how to ensure a kill shot at any shadow moving around your house at night. Be they burglar or, maybe not as desirable, family.

One huge opportunity (and maybe someone's already doing it) would be in the more advanced educational field, offering a college degree in Violence. That'd be a cool way to get the upper leg on things. Imagine the deeper philosophical background and how much practical value that would be for you, being able to develop new and better techniques of defense, plus offensive maneuvers. Obviously you're not going to get that at the gun range! And this isn't just the namby pamby stuff they teach at places like West Point, which, frankly, has more to do with the niceties of saluting and keeping your uniform clean than anything else.

In case you're thinking this is just general education classes with a few hours of Violence courses, let me assure you, it's not. There's no general education hours. English, math, even the history of warfare, you don't need that. Instead, it's one useful course after another:


Introduction to Barbarism;
Stockpiling the Perfect Arsenal;
Beheading -- The Cutting Edge;
Bombs -- From Backpacks to Mack Trucks;
Terrorism's Secret: The Buddy System;
Plus lots of smaller stuff:
Hold Ups;
Burglaries;
Truncheons, Bludgeons, and Pikes -- Your Personal Toolbox;
What Color's Your Chainsaw?
and, Pyro -- Not Just for the Fourth of July.

I'm excited already. I wouldn't mind signing up for some of this stuff myself. If anything, it'd boost my personal confidence. Yes, I've had troubles in my life. I remember this one time in the '70s a big drunk grabbed me on the sidewalk, thinking I was someone else. I was lucky to wriggle away and for the fact that he couldn't run. But with a little training I could've wasted him, then when he woke up he would've regretted--- No, he would've been dead.

It might, however, be dangerous for the professors. The students are going to want to really prove themselves. They're not going to just skate by. The practical implications, having a guy like me able to wriggle away, could be deadly. So when the professor calls for role playing, you honestly might end up dead. And the same goes for the professor. So the school will need the biggest, baddest, ex-con, cyborg, armed guys with hairpin triggers, the whole bit.

The implications are crazy. Because I don't think you could have students start the training, get disgruntled, and drop out. They'd be giving away all the techniques (and philosophy). And then how would students have a leg up? No, if you're a student and you can't cut it, you'd about have to be one of the victims during the demonstrations or practicum stuff. Say you're defending your thesis; you might need several victims.

Violence is increasing. It's getting dangerous even to go out and get the paper. That happened the other day, a drive-by shooting. I bent down to get the paper and a barrage of bullets took out the ass of my pajamas. Was a good thing I was reaching at an angle. But how much better it would've been had I been trained. I could've cleared the road with some mortars before going out, then got the paper and got the hell back in.
Posted by dbkundalini at 9:54 PM