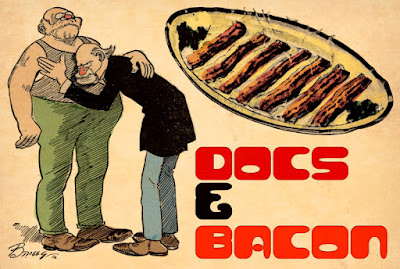 As everyone knows, there's two things you rarely see in public. Doctors and bacon. I believe I've had an interesting experience with both. First, it occurred to me young that this was so, that there was something mysterious about doctors and bacon. I mentioned it to a teacher once, who said, "Hmm," then she excused herself for further research on the subject and never came back.* I keep thinking the same thing might happen to me, but so far, here I am. But I've taken precautions, mostly prayer and supplication. Besides that, I'm damned brazen. And that also carries weight with the powers that be.

This is a true story. I once saw my doctor in public, riding a bike, no less, and I immediately filed with the Board of Doctors and Bacon to have his credentials removed. Now he's senior breakfast cook at Maude's on 8th Street. Good with bacon but still working on a remedy for popped yolks. Going with the assumption, You can cure bacon, why not eggs? But that's that guy, who couldn't do much with me. His big thing was to give me medicine you couldn't take with grapefruit. Another breakfast favorite. Guess what, stupid, I'd rather eat grapefruit than take the sugar pills you're pushin'! Anyone with me?

These days it's not just grapefruit everyone's against, but bacon. Which is also the fightin' side of meat! And I'm up in arms too. Half my grocery budget goes for bacon, although I'm frugal. I check the price of bacon like it's the stock market, and that's why I go to any one grocery store. I love the $2.99 stuff, but lately it's been more on the $3.30 side of things. But everything goes up, including doctor bills. I've got a doctor, but bacon's got my heart. I start off with a pound for breakfast, and if I'm still hungry I keep eating till it's gone. Then spend the afternoon in the store with a wheelbarrow.

Anyway, I love to stick it to doctors. My current doctor knows me inside and out. He's had his finger up me more often than I care to think of. He's even performed a colonoscopy and a related surgical process** on me. And he's never once mentioned bacon, so he's OK. Now, of course, if I ever see him in public, I'll have to reevaluate, but so far so good. So I'm leaving him -- this one doctor -- out of the following remarks. On comparing and contrasting doctors and bacon.

What's something else besides doctors you never see? Dead pigs. That's damned odd. I've seen every manner of roadkill and carrion, just never dead pigs. Once I even hitchhiked with some guys in a pickup truck. And they went around a corner -- they were carrying a lot of baby pigs -- and the back rails of the truck fell off and the pigs followed. (It was also raining). So instead of standing on the side of the road like I was 5 minutes before, I was with them in the mud and ditches catching pigs. Which were all alive. That's never happened with doctors.

One of the most obvious similarities of doctors and pigs, pigs are cured meat and doctors presumably cure sick folk.*** All praise to the Lord above, though, who my grandma said does the true curing. It's just these bastard doctors that stick you with the bill. Taking credit for the Lord above's work.

This is one you have to think about: Doctors are hams, bacon's related to ham. This would be another good place for a religious joke. Shem, Ham, and Japheth. You see ham, you eat it. Bit of a stretch, but nothing like our doctor-ham friends. They're all good cheer when they come in, shaking your ham, -- hand, smiling. Next thing the business office and insurance company's got you on the grill for everything you're worth.

Can't think of much else. You always see bacon in strips. The doctor makes you strip. You separate bacon with greasy hands. The doctor separates hams with greasy fingers. The longest three seconds in history, you're bacon him to stop. Bacon comes in slices. Doctors also have sex.

*There's a penalty for delving too deeply into life's mysteries.
**That reminds me: When you're young, you get Pull-Ups. When you're old, polyps.
***I know, I already used the 'cure' line, but wanted to get the grandma story in.
Posted by dbkundalini at 11:10 AM