My Huge Dog Is Out Of Control 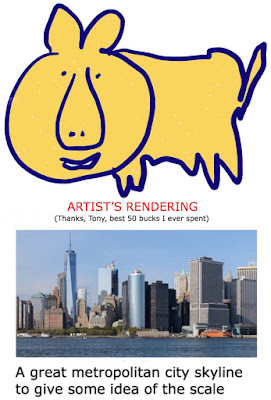 I’ve always been a person grounded in reality. So it’s not a case of denial here, despite what the veterinarian says. To those clowns, it’s always your fault, never the animal. Which is clearly false. I don’t force feed her, she could refuse. I put the food out there, she eats it. There’s no funnel. There’s no mouth brace under the meat grinder.

Whew, glad I got that off my chest. I have such RAGE against veterinarians, which, I suppose you share. Veterinarians are like psychologists, in a way. Psychologists know people and we are people, so we know if they’re right or not. But dogs aren’t people. So veterinarians read their psychology, then think “You’re not a dog,” so you should take their word for it and pay through the nose.

Well, no more! This dog knows what she’s doing when she eats and drinks. And if she didn’t want it, she wouldn’t browbeat me to give it to her.

Actually, the browbeating began when she was tiny. That look in her little eyes was “You give me what I want or you die.” I didn’t give it much thought then because she was so small; what’s she going to do, nip my heels? But we compromised. I’d go halfway on her demands, a little bacon, a little hamburger, a sip of whiskey; that’s reasonable. Once she put on a little weight the browbeating got worse. Pushing me in my chair to face the pantry. Pushing me to the fridge. Nudging me toward the hutch where I keep the whiskey. Then — and we’re skipping some months, probably a year and a half — the pressure was greater. Picking me up by the scruff of the neck and setting me by the pantry, flipping me on my back and pulling me by the foot to the fridge, and demanding whiskey with bared fangs. Leading me to observe, “Jeez, all that food and no dental hygiene and her fangs white as pearl. Has to be the whiskey.”

OK, now I’m on my own. The vet said don’t come back till I’m ready to “face facts.” I suppose I didn’t help myself when I dressed him down, calling him a dog- and cat-killer for all the old crippled dogs and cats that are put down on a regular basis. I even tinkered with the idea of sending him a card on Hitler’s birthday; I couldn’t find much at the card store that was to the point.

I went home, dedicated to making my dog face facts. The first day went OK. She grumbled but I cut the portions way down, a pound of bacon and a pound of hamburger and a cup of whiskey. She looked at me like “OK,” very tentative. But the next day the look was worse, then worse yet. Until she took matters into her own paws, and that’s when the pushing and dragging started. Now I’m compliant, because, really, she’s so insistent, I might be her next meal if I’m not.

Still, you know, I’m proud of her. She’s a like a body builder, only you have to flip the picture. She’s a body bloater, with my hope that at some point she’ll take up a healthy exercise regimen and keep her size but be so muscular that they take her into the service, exactly what happened to a dog in my hometown that was mean as hell. He went to Vietnam. Whether he got hooked on Vietnamese food and booze, they never said. Doesn’t it have a lot of soy?

So that’s how it stands. But how about the veterinarian? He’s a loser. He gave up without a fight. He “knew better,” but couldn’t convince me or the dog with reason. Therefore he was just a bully. And there’s only one way to handle a bully. Go the other direction, leave him in his misery. Maybe he’ll come around with age or die trying, I don’t know.

Yet I still insist it’s not my fault. The dog’s the one that allowed herself to spiral out of control. She got hungry, and instead of rationally saying, “I don’t need these larger portions, I think I’ll look after myself,” she threatened me. Strike 1. I blame her for even wanting bacon, hamburger, and whiskey. Although they are all delicious, and they make dog food to resemble bacon and hamburger. And there’s a phrase, “You old booze hound;” that had to come from somewhere.

It’s hitting me hard for the simple inconvenience (1) and (2) the money. There’s nowhere to move in the house, almost. And the money’s going down the drain. I only have money from Social Security and the disability checks from my game toe. I can’t be in economic thrall to her appetites forever!

All that said, it’s still something of a source of pride that I have the largest chihuahua mix on the planet. I have to laugh. We were home one day when the Cancer Lady stopped by for her annual check. She goes, “Oh, where’s your dog?” I go, “See that couch in there?” “Yes,” she said. “I don’t have a couch...”