Within the Walls of Heaven 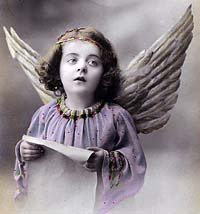 Grandma Slump loves Heaven. As I've said, she's often there, then occasionally back here on Earth. Whether in the body or out of the body, I can't say -- God knows. The fact is sometimes I see her, sometimes I don't. She may be a phantom, a spirit, or just a slumping old lady carting around a lot of ambiguity as to her exact status in terms of cosmic things and our day-to-day practical reality.

The more I say about her, of course the more room there is for contradiction. And the more contradictory comments I make the less Grandma Slump's existence can be thought of as something of fact. This is a concern that keeps me up nights, and in the other moments I am able to sleep, the time is far from restful, usually involving tormented dreams, and, it is reported, scenes of terrible twitching and babbling. I know the other day I woke up with a very wet pillow, so...

As I was saying, Grandma Slump loves Heaven. And she's loved it ever since she was a little girl in Sunday School, and even more when she got a book at Christmas in 1914 from her Aunt Emma. The book was Intra Muros ("Within The Walls," sometimes called "My Dream of Heaven"), by Rebecca Ruter Springer. In this book the author describes scenes in Heaven, some of the sights and sounds, and something of the life -- social and spiritual -- in that realm beyond. Springer writes that she has never claimed "this strange experience" is either a revelation or an inspiration, but was something that came to her during "a period of great physical suffering and prostration, and I have always considered it as sent in compensation for that suffering." (p. 79.) On the same page, she says at the time of her experiences "the marvelous things...seemed indeed to me to be a most wonderful revelation."

The book focuses on the coming to terms with Heaven for the recently deceased, their homes, their renewal, their relations with the Lord Jesus and with one another, and watching for those still to come. It has some great scenes, including bathing at the lake, in which one is filled "to overflowing with a draught from the Celestial Life itself." (p. 33.) The lake is "as smooth as glass, but flooded with a golden glory caught from the heavens, that made it like a sea of molten gold." (p. 31.) People are in the lake, floating, swimming, and a band of singing cherubs floats high overhead, drifting, with their baby voices giving notes of joyful praise. (p. 31.)

In the lake, the narrator is amazed by perfect prismatic rays around her, then being within the water "as upon the softest couch." (p. 32.) Earlier in a river, she also had an interesting experience, plunging into its bright water. To her surprise she could breathe, laugh, talk, see and hear under the water. "I sat down in the midst of the many-colored pebbles, and filled my hand with them, as a child would have done." There was something of a cleansing going on. (p. 7). The river "takes away the last of the earth-life, and prepares us for the life upon which we enter." (p. 33).

And of course, Jesus is there! In Heaven. He comes by the house, and is very tender. She whispers in an excited way, "My Savior -- and my King!" Jesus acknowledges this but is modest, "Yes, and Elder Brother and Friend," putting them on a more even plane. Jesus says, "Ah, now you begin to meet the conditions of the new life! Like many another, the changing of faith to sight with you has engendered a little shrinking, a little fear. That is all wrong. Have you forgotten the promise, 'I go to prepare a place for you; that where I am, there ye may be also'? If you loved me when you could not see me except by faith, love me more now when we have really become 'co-heirs of the Father.' Come to me with all that perplexes or gladdens; come to the Elder Brother always waiting to receive you with joy." (p. 38.) I love that.

Of course she, the narrator, is thrilled, drinking in the tones of Jesus' voice, watching eagerly his face, "exalted, uplifted, upborne, beyond the power of words to express." Then, with a divine smile, he arises, and assures her, "We will often meet," and passes noiselessly and swiftly from the home. (p. 38.)

The choirs of angels, the waters of life, the oneness of sharing in the divine experience, the reunion with passed on relatives and friends...it's quite a presentation. One slightly, ummm, irritating tendency of the author is to leave the indescribable or the very sublime undescribed. Example: "I would I might record in detail the precious words of wisdom that fell from his lips; I would that I might recount minutely the events of that wonderful life as it was unfolded to me day by day; but I can only say, 'I may not.' When I undertook to make a record of that never-to-be-forgotten time, I did not realize how many serious difficulties I would have to encounter; how often I would have to pause and consider if I might really reveal this truth or paint that scene as it appeared to me. The very heart has often been left out of some wonderful scene I was attempting to describe, cause I found I dared not reveal its sacred secret." And blah blah blah, tell it in the sequel, honey!

I'm that way in describing things too, the aspects of Grandma Slump's life that may end up overly-contradictory. For example, if I say her given name was "Margaret Hill" and that Aunt Emma gave her this book at Christmas in 1914, that limits me in what else I might say someday. It's like being in a court of law; you don't want to say too much but you want to tell the truth. But what if the truth is that there is an element of fantasy and concocting in your story all along? Then you're either dependent on a very accurate memory, a set of biographical 3" x 5" cards, or just acknowledging up front the possible contradictions. I have chosen the latter course.

As to this book, it's been a few years since I read it, and I had to pick my way through today to get the quotes I have. I definitely remember the water scenes, although I thought they were a little more like where the participant was really encompassed and really, really renewed. Maybe I'm just not seeing the scene I thought I remembered. And Jesus is definitely a great presence in the book, but he comes and goes quickly and there's really not much that goes in-depth in any of those experiences. There's a good celestial city scene in the book somewhere.

But, as I said, the author's reticence to say too much is irritating. In a supplementary chapter, she acknowledges, "There are some seeming inconsistencies in the book of which I myself am aware." (p. 84). And since her readers were seeking practical information and not just a story -- comparative distances in Heaven, and the like -- it would probably be a lot easier to just pull a curtain, a veil, over things that would be tough to describe. To which I say, Try harder next time, Springer!

After all that, you can see why this has always been one of Grandma Slump's favorite books. To her it is more or less an accurate account. As one who spends a lot of time in Heaven, as she does, she ought to know!

P.S. I've looked this book up on the internet, and it appears the current editions have an additional chapter. I don't know what that's all about, or whether it would really add anything meaningful beyond what the earlier editions had. My copy – I guess I have two – but the one I quote from above was Copyright 1898 by David C. Cook Publishing Company, and in truth was a gift to a "Margaret Hill from Aunt Emma, Christmas 1914."
Posted by dbkundalini at 8:19 PM