Change She Can Believe In 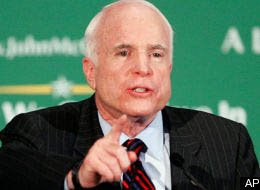 Grandma Slump wants change she can believe in. Or maybe not.

Meaning, she wants that nice man, John McCain, to be president. And if he thinks he believes it, then she thinks she believes it, too. My own suspicion, and I'm hoping she doesn't read this, is that he reminds her something of Grandpa, and she might be reliving her procreation years. As soon as his speech started -- this is a fact -- she excused herself and went to bed. So, you tell me...

But had she actually stayed up and watched the speech, she would've seen a rouser. McCain was at his strongest, most compelling. And while I didn't see the crowd, I know it had to have been quite a few. I heard one of the network commentators, though, saying that 30 of them were staff members, 20 were family, five were recruited off the street, and 10 were from FEMA, there to take care of any damage McCain might do to himself.

Myself, of course I'm not a McCain man. I'm a part of this family, you see, and like Grandma, I also remember Grandpa. Grandpa Slump was a hard man to love. Very curt, abrasive. He'd never give you your due, you know what I mean? If you caught a fish, it was never big enough. He was more focused on his own projects, big ideas, he thought, like making wren houses for craft sales that unfortunately very few people wanted. I always thought, sure, wrens were a big deal in 1895, but this is 1975 (which it was). So when he died in '78, we had about 400 wren houses to get rid of. They make excellent kindling for the fireplace, if you smash each one with a sledge hammer first.

Anyway, Grandma Slump has better memories about Grandpa than I. And she also carries over some of those feelings -- I'm sure of it -- for John McCain. He represents change she can believe in. Knowing her as I do, the change she believes in is "no more change, please." Just keep things going like they have been going and she'd be happy. Like that nice Mr. Bush. Do what he did.
Posted by dbkundalini at 7:25 AM