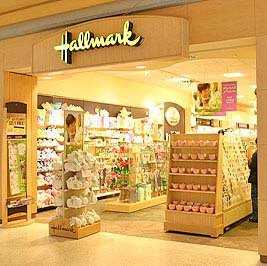 I've needed to buy some cards lately. Sending cards, giving cards is not something I do by nature. It's only when there's a certain amount of force involved, social expectations that cannot be thwarted without losing massive amounts of face, that I think, 'Better get a card.' Graduation is a huge example.

Anniversaries are like that, too. I used to make my own. Mr. Creative, all that. Or Mr. Cheap. But now I grin and bear it, if I'm somewhere that has cards, just get one. They're very expensive, too, for some little piece of tripe, usually. My last anniversary card actually had a very good saying on it, that wasn't too over-the-top, and wasn't "funny" in that kind of unfunny way they tend to be.

So I've been to the local Hallmark store a couple times in the last few weeks. This is a place that is also a gift shop with all the kind of stuff you might expect in there. I should've made a list. It would be quite a list of stuff, most of it very grating on my optical nerves, and certainly most of it far from tempting. And I have the consumerism bug like everyone, worse.

You wouldn't call it a feminist place, probably, if you use words the way I do, how I've heard them used over the years. But of course it's all very feminine. Dripping with femininity. They need a scanner right there about waist-high at the door, scanning for testicles, and if it goes off a big wall of bars comes down. Except, I guess, they're not wanting it to be a ladies' club, because they want guys to come in and get something for their wives and grandmothers. No guys are working there.

I could take Grandma Slump in there. But she's kind of an old fashioned gal. I don't know that she wants to collect some of the knick knacks they have, little lighted up village buildings, every kind of trite religious keepsake you can think of, sayings about grandchildren being the light of your life, etc., ad blasé infinitum. All very adorable and precious. Grandma Slump cans, peels potatoes, washes out tubs, baits hooks, picks dandelion greens, and digs outhouse holes. And that's just for fun.

Anyway, to sum up, the Hallmark store is like diabetes in the eyes, when you look at that stuff. Very, very tough to endure.
Posted by dbkundalini at 6:16 PM