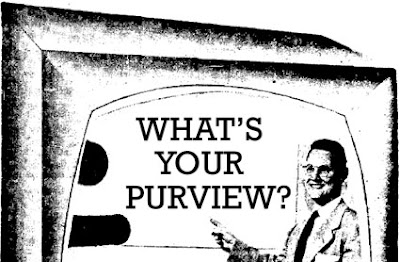 "Purview" is a word I have a hard time keeping in mind, its definition and how to use it. Typically, the only way I can use it in a sentence is to simply use it afresh. If I sit and think about it, it becomes unknowable and absurd quicker than most other words. Maybe the key to that is I only use it once in a blue moon.

But when it's called for, of course I use it, whether or not it makes me sound like an egghead. Yes, I have regrets anytime it escapes my lips. Because people will be sitting there going, "WTF is this guy talking about?" or words to that effect.

Today I used "purview" early on just talking to myself. And decided then and there it'd be a great game show from the past -- "What's Your Purview? -- with a panel of blindfolded socialites guessing a particular individual's purview. He's out there, and the panel is thrashing about, hoping to get a handle on his purview of whatever the topic is. "Would your purview ever include a breadbox?" I think that'd be entertaining.

Is something like that funny or interesting to you? Would it be locatable in your purview of what a decent game show would be? The subject could be something very trivial, like what his favorite brand of coffee is. He has a purview encompassing the subject, probably like all of us. Just speaking for myself, I have a definite favorite, but an overall purview on the subject that still encompasses other alternatives.

Or the subject could be something quite complex, meaning they'd have to have guests whose purview of matters had complexity in its scope. On a broad subject like the underlying unity of the world's religions, let's say, not everyone's purview could do it justice. But it'd still be interesting to see them try, humorously so if they were fundamentalists, or enlightening if their purview were already broadened by thought and strong conclusions. I mention this in particular because I feel that my purview concerning the topic is probably broader than most. On that and old cartoons.

However, let's leave me out. Having a broad purview, as I do, I'm more than willing to admit other voices. Plus, my purview of topics is wide enough that, really, any subject would be fit fodder for any given episode, and would interest me. If your purview differs from mine, I don't mind, because my purview is broad enough to allow for all kinds, the ignorant as well as the smart.

So let's say you ended up on the show. It's you and another contestant. The panel is in place, judging one purview against another. You win, that's good. Or you lose, it's good. Because I have a broad purview on the outcome of the show, knowing that the lovely parting gifts are worth having. And just being on the show, in my overall purview of entertainment history, it's a nice slice of immortality.
Posted by dbkundalini at 10:44 AM