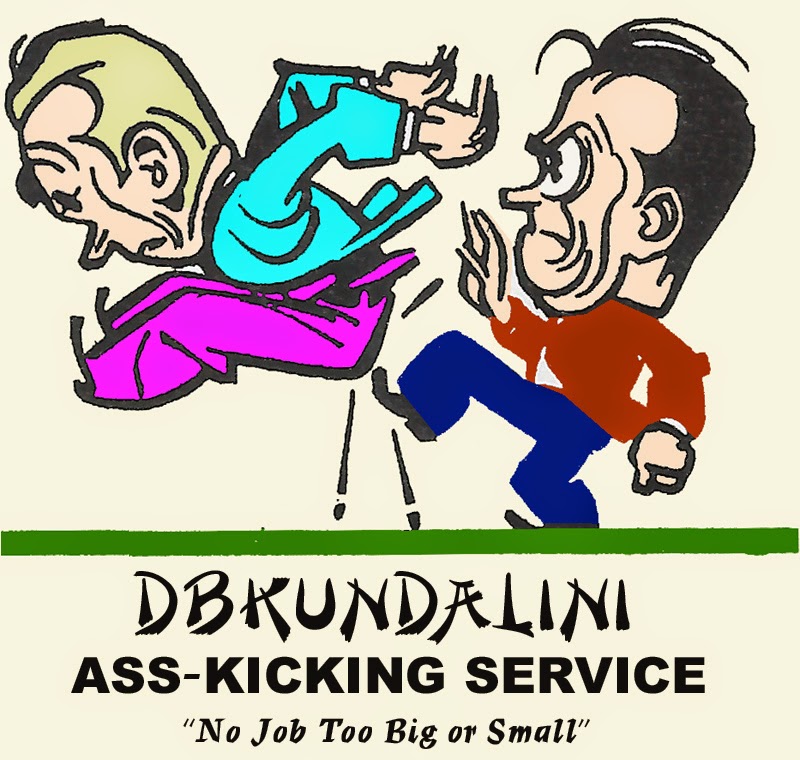 Today's a big day for me! It's the one year anniversary of my business, DBKundalini Ass-kicking Service. I have to tell you, I was a little nervous when I started out. I had a number of friends who foresaw nothing but doom and gloom. They thought they were being cute when they said I'd be the one getting his ass kicked. Well, they were wrong. Business is good, I'm keeping busy.

It's frankly amazing the things that have happened in one little year. I have a few guys in town who simply enjoy having their ass kicked, hard. I do the best I can, although, to confess, I have a little arthritis in my kicking foot (I'm rightfooted). But I'm saved because mine's the only ass-kicking place in town. I do all I can to send them out with a smile on their face and a sore bottom in their pants.

I don't mind the arthritis so much when I'm making money, as you can well imagine. But I made a major mistake in this regard trying to gin up business. You know those discount cards civic groups sell? They list a business, then there's a freebie or discount. The pizza place gives a free order of break sticks with purchase of a pizza, the bowling alley gives a free half hour of bowling with the purchase of 5 pitchers of beer, and of course a hair salon offers a eye wax for a measly $5. Notice the common denominator there? They're buying something, unlike mine. In my ignorance I offered three free ass-kickings period. It's tough, since the average person with an ass is content with three kickings.

Still, life is good. To make up for that, I get lots of recommendations from doctors and lawyers. It turns out doctors are more frustrated with their patients than they let on. A guy drinks more than he should, for example, you'd think that'd be good for the doctor; he's going to need more care. But doctors look toward a more distant horizon, keeping the patient on the hook as long as he can. Early mortality (as in drunk driving) means lost money, especially when you consider the true bonanza they're look forward to, an average of 14 surgeries for every guy over 80. So they find "something wrong" with their ass and send them to me for $20 to $25 worth of kickings. I like that.

Lawyers are about as good, as they're usually acting on behalf of an aggrieved spouse. The guy's been cheating, the wife wants a divorce but wants the husband's weekly paycheck. She agrees to keep him, but only if he knows there's an endless stream of severe ass-kickings in his future if he misbehaves. The husband knows he has to submit, because it's cheaper occasionally denying her expenses while married than divorced. That leaves more money for his mistress. I don't care who wins or loses. I just take the money, kick his ass, and let it go.

One of the big surprises in the last year, something I didn't expect in my wildest dreams, has been a contract with the university for their losing sports teams. Basketball is entirely successful, but football is a total bust. Which is bad for the town but great for me! Because written into their scholarship is a nasty little agreement that at "the coach's discretion" they agree to "counseling, verbal or physical, as he shall choose, excluding the death penalty, of course, but including ass-kicking." This is amazing stuff. I have these huge guys who could kick my ass east, west, north, and south, if provoked, and there they are, lined up, getting their ass kicked by a wimp like me. Big bucks, too, university standards ... they pay five times the normal therapeutic rate! I just keep my fingers crossed, that they win enough to make the kickings seem beneficial but still lose enough to keep them necessary.

I've had to turn down a few clients. One thing I will not do is kick the asses of kids. Unless I'm personally and severely provoked, and even then I haven't been able to catch the little shits. Again, my arthritis, and, at the end of an average day my leg's dead tired. Which they know. I came home one day and these kids had picked every pussy willow off one of my pussy willow trees, and had them stacked up on my fish-cleaning table. I went limping toward them, moving my foot in a slow swing, and they dashed out of the yard quicker than snot. Still, like I said, I've turned down clients. Home school parents are often frustrated, and they're always calling me. "Junior's falling behind in his scores." I'm all like, "Then get him a different girlfriend ... I'm not kicking kids' asses!"

One whole year. And now, if my leg holds out, I'm going for two!
Posted by dbkundalini at 2:26 PM