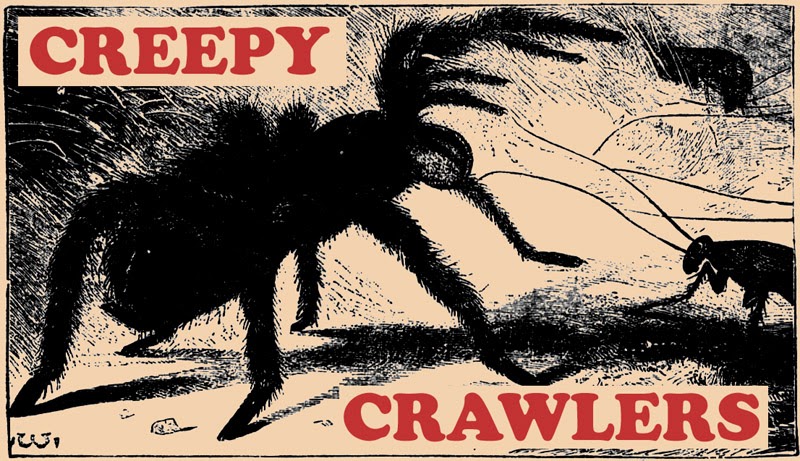 More and more people look to the internet for advice, how to better live their lives. I myself have often looked up information, such as how to self-diagnose illnesses and conditions. A few years ago, you may recall, I had big troubles with olfactory hallucinations. I dealt with every issue through internet advice, and now, at this very moment, I'm OK. Things smell pretty much like what they are.

Now, some advice I can offer has to do with spiders. I believe it's important to check for spiders, at least in most cases. My belief is that anything left lying around for very long will attract spiders. This is confirmed by experience, because I've seen spiders here, there, and everywhere. I have to figure they came upon the item (place) and simply moved in.

Today, to give an example of my caution, I was going to put on some shoes that I haven't worn for a month or more. The first thing I worried about was, Could there be spiders in them? The last thing I want is put my foot in just to be bitten by spiders, or even to crush them. I'm both careful and compassionate. So I pounded the shoes against something, to jar loose anything that might have been in there.

One thing I'm not cautious about is putting on my everyday shoes. Until now that hasn't seemed like an issue, although I may start now, because, Why wouldn't they move in to a pair of shoes overnight? If it's a month or so, that's only one day multiplied by 30 or so. And this could be the very day or night they discover your empties.

Recently, and this is uncharacteristic of me, I've had a spider hanging around the bathroom, and I've been letting it hang there. I've been watching it. It's been very peaceful, just quietly doing nothing, meditating perhaps. Day after day has passed. He's here, then tomorrow he's an inch to the left, etc. But he's stayed in the same place. Until the day before yesterday, when he was gone! Where'd he go? I may never know. Or I may find him, in a shoe or in the pocket of a shirt in my closet.

Or, let's just say he's real adventurous. Maybe he went into my dresser. With winter coming, what would be more comfortable than a closed dresser, in among the warmth of my underwear? That's where I'd go, maybe to the T-shirts instead, but I'm not a spider, who, likely don't have good reasoning powers when it comes to undies. Now I'll have to check there, and frankly I'll have to check everywhere, because even if I find this particular spider, who's to say that's actually him? And not another or another or another ... with the entire place riddled with spiders, rife with them!

They might be amongst the towels, in the bed, under my pillow, inside my pillow case -- they can be anywhere! I'll never be able to function, I can only imagine how bad it must be for people who live where there's also scorpions. They're not sleeping at all, just zombies staggering around, doing anything they can to get a moment's rest, turning things over, forever alert to the danger that spiders, snakes, scorpions, lice, roaches, and all the rest of nefarious nature is about to get them. All these terrible creatures are small but potentially dangerous, whether they're one ... or a million.

My advice, check for spiders. Once, twice, many times. Your life is hanging by a thread as it is. You can't allow anything else to happen.
Posted by dbkundalini at 1:04 PM