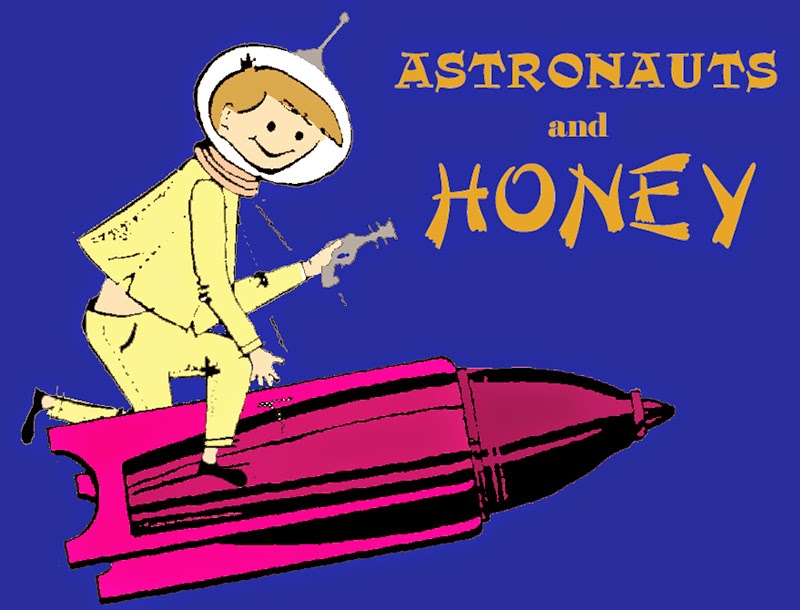 I have an attention span disorder when it comes to two things, honey and astronauts. I've found that both are easy to ignore, forget, and neglect. When it comes to honey, once it's in the cupboard, it's completely forgotten; I shouldn't have bought it. And the same thing holds for astronauts, but with more nuance. Theoretically I like astronauts as much as ever, but they're not seen as heroes anymore, or even given actual names that I hear, so they're out of the public eye, and definitely forgotten by me.

I have to tell you -- so you understand -- that I honestly do love both honey and astronauts. As for honey, I love its looks, its consistency, its taste, and all the rest. I fully support any and all efforts to preserve, protect, and defend honey bees. I've given to understand that they're vital to our well-being, not just in the making of honey but for every other crop, from soup to nuts.

OK, picture me in the store when the spirit moves and I pick up a jar of honey. I think of what I'm going to do, have a tablespoon of honey everyday for my health and happiness. The first day I eat a tablespoon, the second day the same, the third day the same, the fourth day a butter and honey sandwich, and the fifth day something else. Then the sixth day comes and I'm out of town. The seventh day I'm still away. The eighth day I get back home and by then I've forgotten I even have honey. The next time I see the jar is a year and a half later, by which time it's crystallized and congealed and looks like hell. I've heard you can heat it up and make it edible again, but it seems like I've tried it a couple times and it's not the same. At this rate I won't buy another jar of honey for two years. Because I've already got six to eight jars of congealed honey junking up the cupboard.

I shudder, thinking of the poor astronauts, all whom I've also forgotten. It was fantastic when they were taking off, great when they achieved orbit, and wonderful when they went for a space walk. But coinciding (or not) with me going out of town, by the fourth or fifth day our beloved astronauts are on their own. I can only hope Houston hasn't forgotten them, but let's say they do ... How horrible it must be to be an astronaut, when it used to be such an enviable profession. I might've been an astronaut, but once again, as has happened so often in life, math was my downfall.

The astronaut, quite unbeknownst to me and everyone, is radioing earth on the fifth day: "Houston, Major Tom here, floating in my tin can." But all Tom hears in reply is static, crazy static, so crazy it's indicative of static quite on its own, as crazy as having a lost weekend. Like the honey jar, he's in the cupboard, forgotten. Everyone's out of town!

Fortunately, there's plenty of supplies on board for a long flight if need be. Just like the honey in the jar doesn't crystallize and congeal immediately. You could take it out of the cupboard a couple weeks later -- I suppose -- and it'd still be good. Similarly, the astronaut isn't in any huge danger, just so Houston remembers him reasonably soon. But once honey's forgotten, it's forgotten. And the same thing, I'm thinking, has to hold for astronauts. We may have a hazy recollection of launching them, but very soon the memory's drifted away.

Six months later, the honey looks like crap. And the astronauts are all dead, having etched on the dash panels some last message, such as, "Tell Laura I love her," a last provocative, plaintive message to someone, perhaps his wife, mistress, lover, or sister.
Posted by dbkundalini at 3:54 PM