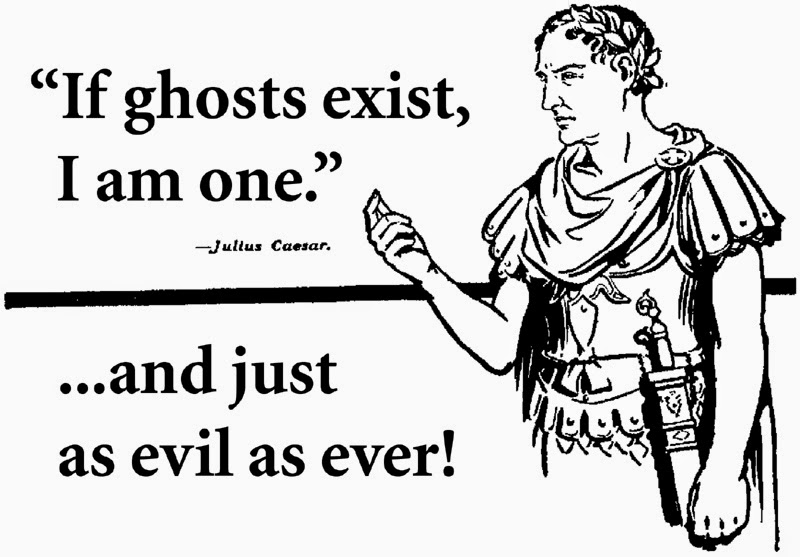 Was Julius Caesar evil? I'm asking. For once in my life I'm not trying to conceal my ignorance. I know virtually nothing about him. I tried to read him in Latin one time. But not knowing Latin it was a tough go, and I made it up to about page 4. I know he traveled around doing stuff, to England, building walls, etc., but that's about it. And I read Shakespeare, the play where he got killed midway through.

My other exposure was the Adventures of Superman episode where he (apparently) comes back from the dead and appears to Perry White, who has a catchphrase, "Great Caesar's ghost!" The way that episode goes, if memory serves, is that it's just more Adventures of Superman two-bit thugs out to swindle Perry for a few bucks. I love the old Superman show, but there was never much there.

For my purposes today, Great Caesar is very evil, and his ghost, being him, is also very evil. And that's me saying it, who basically doesn't believe in ghosts. Well, I've had some scary moments in my life where I've imagined there were ghosts, like when I was a little kid. The last thing I wanted to be dealing with -- and my main Superman days were when I was little -- would've been Great Caesar's ghost!

It's easy to imagine the ghosts of the great -- the infamous great -- was being around. They were larger than life, therefore they're larger than death. They did their mean crap when they were alive, and now that they're dead, they still have the moxy-on-the-ball to get out there and do mean crap. I could probably toss out Hitler, since he always comes to mind when it comes to evil. And Julius Caesar, whose evil I'm not even sure about.

Whatever the reason, he's back with a vengeance, no doubt because he's dead and wants to share his misery with us. He's a ghost, that's one word for it, but he's also a shade, a somewhat freakier ghost. You see him when the light's right, and before you can get a handle on what you're seeing, he's gone!

What precisely he's sharing of his misery, I haven't had personal experience. Except I know it can't be good. Likely much of it's passive, afflicting the vulnerable. Like Perry White, who was very vulnerable in that episode. Tired, dragged-out, listless, with very little resistance. He needed Jimmy Olsen and Jimmy's pal, Superman, to help.

All evil must be dealt with. Please vote Democratic.
Posted by dbkundalini at 10:38 AM