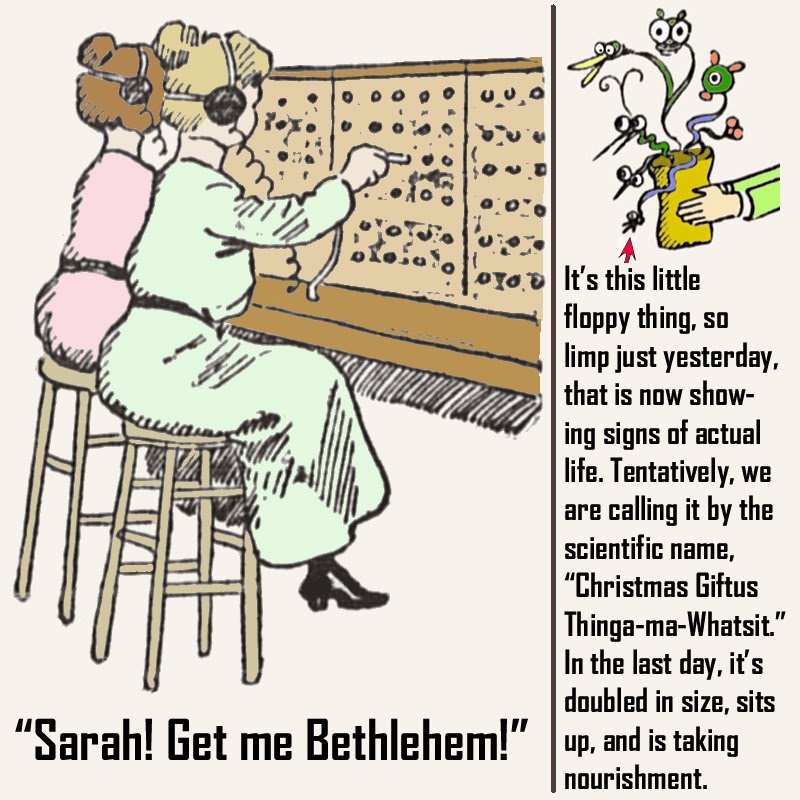 Since about August there's been real despair at the manger scene in Bethlehem. Despite the best preparations for Christmas, they could find no new creature to share the true meaning of Christmas. Which, as we've heard all our lives, is very important.

The Lord is born! Wise men came from the East, and then over the years various other characters appeared, representing all creation: Chipmunks, beavers, birds, Frosty the Snowman, Little Drummer Boys, Little Drummer Girls, misfit toys ... The very last of the ordinary animals to come was in fact just a few years ago, the mole. Being an underground animal, no one thought to dig one up and take it.

With the mole used, every year they've been looking for other new things. Even microscopic things. Last year was touch and go, until they discovered Grubby the Pool Virus, found in a dank corner of the dressing room. Related both to dirty feet and poor janitorial work, Grubby, like Frosty, "came to life one day," and Christmas was saved.

I've been keeping track of the search most of this year. They've been using some of my global contacts, thanks to the blog, meaning I've been scouring the Ukraine and a few of the other more exotic countries of the world. Remember Mauritius? I get hits there, too, and I'm always thinking it's almost obscure enough to have new life.

Manger authorities even asked me to get hold of any scientist friends I may have, not wanting to leave any stone unturned in the search. I thought "stones unturned," and immediately thought of Neil Shubin, famous for turning rocks and discovering that each of us is descended not just from other mammals, but reptiles, then fish. Someone in Sunday School a couple weeks ago (true story) said, "Jesus wasn't a reptile." I immediately thought of Neil, but was wise enough to keep my mouth shut. Anyway, I called Brother Shubin, but the best he could do was a fossilized fur follicle from a Tribble. We already got Tribbles to the manger in '68.

So the search has continued fruitlessly. Imagine, then, my huge shock, when just yesterday, right here at my place, one of the heads in a Christmas present I was getting ready to send to a reader was granted life!  How about that? I bought 40,000 of these gifts and, like, the tenth one I'm handling starts moving! One little snaky, floppy, head thing, now going by the preliminary scientific moniker "Giftus Thinga-ma-Whatsit," came to life!

Yes, it's small, dinky, extremely tiny and insignificant. It's actually little more than a head and stem. But there's a few strings falling from it, like delicate roots. Probably the beginnings of a spine. I thought I saw movement, but denied it. Then it moved even more and was even looking around, all very tentatively. The signs of life increased by the second. Twisting and morphing, morphing and twisting.

I sat it down and told it the true meaning of Christmas, just in case it died, then called Bethlehem and got it on a plane to the Holy Land, and they said it arrived at the stable about an hour ago. With beautiful light beams coming from the manger in response!

Friends, this is it! Whether you're a pool virus, a chipmunk, or a brand new Giftus Thinga, the true meaning of Christmas is here, love, light, greatness and power, the Divine Word within everything. What's in it for you? How about free plane tickets to Bethlehem? .... if your story's convincing enough to the powers that be.
Posted by dbkundalini at 11:02 AM