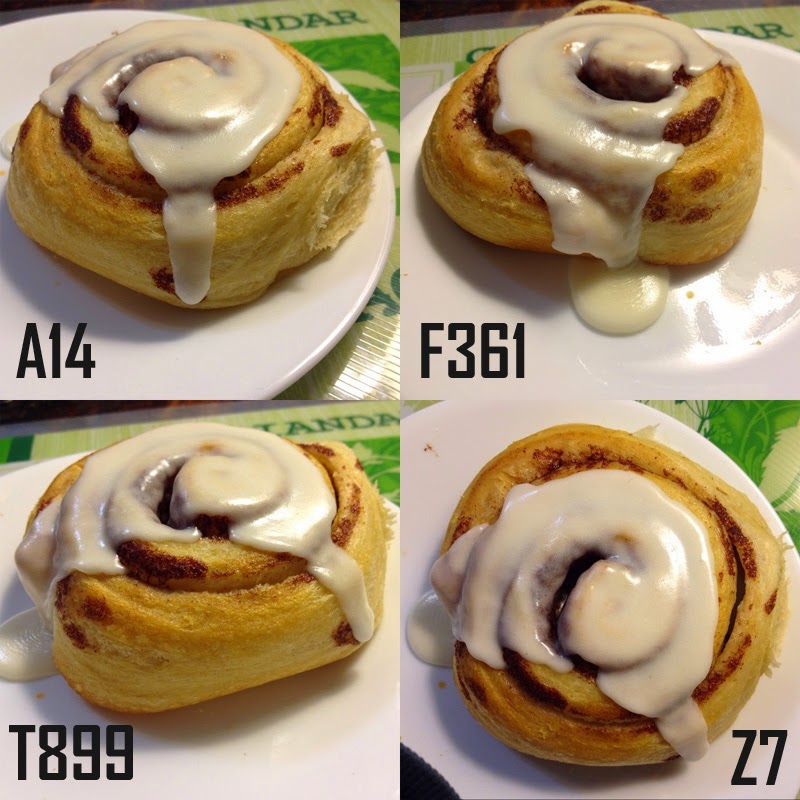 The spirit has hit me once again -- OH YEAH! -- to lay into something, to filet and gut it, to trash-talk it till it can't go on. I love the feeling, the surge of power, in taking a domineering stance and daring the damned thing to get up and fight.

Let's take a look at the cinnamon roll in question. A particularly disgusting looking sample. If the average cinnamon roll looked as pathetic as this one, there never would've been a demand for the thing. In the annals of desserts, there would've been a rather gaping hole, made better by no one ever knowing what was meant to go there.

My basic argument with this guy is its drizzle. Let's look at photo A14. Seriously, was this your plan? You had a little bit of drizzle and you decided to strike on your own, and show everybody how bad you were? Ha! But then when you got your motor running you couldn't even make it to the plate? Look at you, you're a waste of space. You got that far and ran out of juice, dog. You thought you could do it, I guess. I don't know why you thought that, since the juice wasn't even there to start with. It's stupid to think what you did. Maybe a little kick in the pants would've done you good ... before you even started!

Photo F361 takes us leftward. Here the apparent ambition of the roll was to fill up the plate with drizzle. But again ... Was that your big ambition? You thought you were going to impress the world, huh? You were gonna show everybody how amazing you were! And, yes, that would've been very amazing ... that is, if you had what it took to get the job done. Which obviously you didn't! You sicken me. Let's take a look at why you thought that. I don't why you thought that. It doesn't look like you have any brains at all. Is that what it is? Sure, yes, anyone can make a mad dash for the plate, but if they haven't got what it takes to get the job done, they probably should've just stayed home.

In T899 we shift rightward again, right between the two despicable drizzle failures, and here we see a section of the roll that somehow simply failed. Look at you! I may owe an apology to the others, for their failure to execute a proper cinnamon roll drizzle maneuver. Because you have a rather embarrassing bald spot -- extremely dry -- right where your drizzle should've been! And that's much worse. No one wants a bare naked cinnamon roll. Why'd you even bother to come along for the ride? You didn't think we were gonna notice this shameful display? How could we miss it? It's gaping, disgusting to see, and I'm sure, if I wasn't smart enough to pinch you off and throw you away, I'm sure I would've spat you out with revulsion and prejudice.

Z7 shows how the two drizzle points I lambasted are the only drizzle points. Z7, as a picture of the whole cinnamon roll in one view, shows how the damned thing had a lack of organization and presentation from the get-go. How much better, roll, if you didn't have the drizzle to coat your top if you'd had the intelligence not to waste it at the points of A14 and F361! Where was your head at when this was going on? Did you not spend even one moment considering how terrible you were going to look? What is this, the giving-up spirit of a runt, knowing it's a runt, and not worth its place in the litter? I don't know, you tell me! You're the one that stepped out and said you were a cinnamon roll worth eating! I didn't say that! But a cinnamon roll worth eating also has to be a cinnamon roll worth looking at. And on those points, my friend, you failed miserably.
Posted by dbkundalini at 7:52 PM