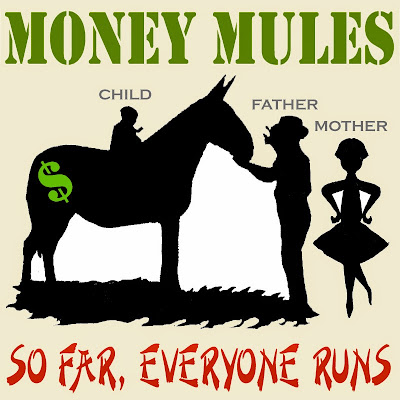 I believe it was just yesterday, I examined the money-making scheme called "Money Mules," in which selected individuals are presented with a certain amount of money. Their mission is to take it, then bring it back to you with whatever interest, profits, or winnings they made along the way. The idea is that both of you would then share the take. I've so far found one fatal flaw, the "mules" never return.

I'm an optimist by nature. I believe if you gave $100,000 to an infinite number of people, it wouldn't take very many years before you found someone honest. That's a conviction I still maintain, despite the disappointments faced thus far. My vow, first to myself, then to you, is that I will crack this nut, no matter how hard a nut it is to crack.

Some of the research has been promising, verifying objectively, and without any shadow of doubt, that people do indeed run. The data is definitive on that account. The crowning experiment went something like this:

What is it about money that makes people, young or old, flee? This is where we need more research. Because the answers surely vary. In the last instance, the father probably fled because he wanted $100,000 more than his family. And the same for the mother. But that doesn't explain the children, willing to flee for such meager amounts. I'm left with the tentative conclusion, they're simply ignorant about money.

The worst thing about it -- other than the breakup of families that might've been saved -- is now these people are fugitives from the state. They cannot come back voluntarily. They would be executed. Yes, I conducted experiments on them. But that's no excuse. I will still file charges. And if the powers that be dare cross my path, I will systematically destroy their families as well, turning them into money mules!

I know, I sound harsh. Yet, I'm not. I have sympathy, and even sorrow, to think that I had anything to do with this horrendous state of affairs for so many. It makes me feel awful, let me assure you, and I would quit immediately if I didn't think there was something more to be learned. Such as, how to make money by finding ... honest money mules. If you're 100% honest, please contact me.

Cannot human nature be changed? Are we all thieves? That's what I want to determine. Which is ironic, since human nature is one of the fields I specialized in, having received a Ph.D. in Human Environmental Science (HES). My thesis clarified some things about human expectations and disappointments, in particular having to do with a gum machine that was clearly full of gumballs but never paid off. I won't bore you with the details, except to say, people are very tenacious when the reward is in plain sight.

But I'm so damned rusty at HES -- hellishly rusty -- I think I might need help. Especially because running money mules is extremely expensive. You lose $1 million out of your personal savings a few times, that adds up. This is challenging stuff.

Here's what I advise the rest of you to do: Hold off on money mule activities until things are clarified, till we determine if there's anyone we can trust, and how we would go about finding those folks.
Posted by dbkundalini at 11:49 AM