The Bright Side of B.B. King's Death 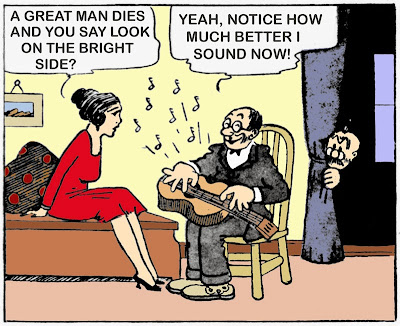 First, let me say, I take no delight in the death of anyone. Least of all people I like. There's those I don't like and they die, but I still don't celebrate. I don't, because I'm very busy working on an alibi, and if I'm celebrating, that's a bad sign. On the other hand, if I look unnaturally sad that's suspicious, too.

So I basically have no delight in the death of anyone. Although, of course, I recognize that death comes sooner or later for everyone. Even me, as I know for a fact I will live to 85, then sometime after that--- everyone will be more alive than me. Sad thing to contemplate.

I do the same thing everyone does when someone famous passes, I contemplate it. Like B.B. King. Who was born a particular day a long time ago, then just recently died. Who was B.B. King? He was a famous blues guitarist and singer. He honed his craft and after honing it was really good. This is where B.B. King and I differ. Whereas I play guitar, I'm quite bad at it. And I've sung the blues, also not very good. B.B. King excelled at it and was wanted for public performances. I sang at church a few times, significantly depressing the offering.

The weirdest part about this for me is, I was within 20 feet of B.B. King and yet never laid eyes on him! How is that possible, you wonder? I'll hint at what I mean: He was in his tour bus and I was in the car right behind him, in stopped traffic, mind you. At that time what could I do? Rush his bus and demand entrance? I have my pride. If he knew I was in the car right behind me, he could've made the first move. But he didn't. Stuck up much? I'm not saying yes, I'm not saying no. The long and short of the story is, Neither of us made the first move, so we never met.

Now he goes and dies on me and I haven't got a chance to make it right. Or to insist that he make it right. The time has passed. We had that one moment in the sun, which completely fizzled, thanks to mutual stubbornness, and now we have to live with our regrets. That's me, whereas he took his regrets to his grave. Nothing I wished on him, it just happened.

But today I'm not thinking about how it is when you don't meet. I'm thinking of our relative talents. He was so good, and I'm so poor at playing guitar. But once a man dies -- and this is indisputable -- no matter how good he was before, he's no good now. You can't gainsay that. Which means, at long last -- and it's literally taken all my life -- as poor as I am, I am a better guitar player (and even blues singer!) than B.B. King!

I've been working on my fragile ego for years. But every time someone great passes, I become that much stronger. Whether it's as an actor -- and I'm now a better actor than even many one-time Academy Award winners -- or a musician, or any great artist, my talents, modest as they are, are better. I started young, too. I was six or seven when Buddy Holly died, making me quite the young prodigy! Then other folks steadily passed on as I grew up -- talented people -- bringing forth time after time even greater excellence in me.

In recent years, a lot of the classic rock singers and musicians have unknowingly given me a lot to brag about, with B.B. King being just the latest. It's sad to say goodbye to him, and we were literally that close with the bus and car, but it's as they say, Every dark cloud has a silver lining for someone. Me.
Posted by dbkundalini at 9:35 AM