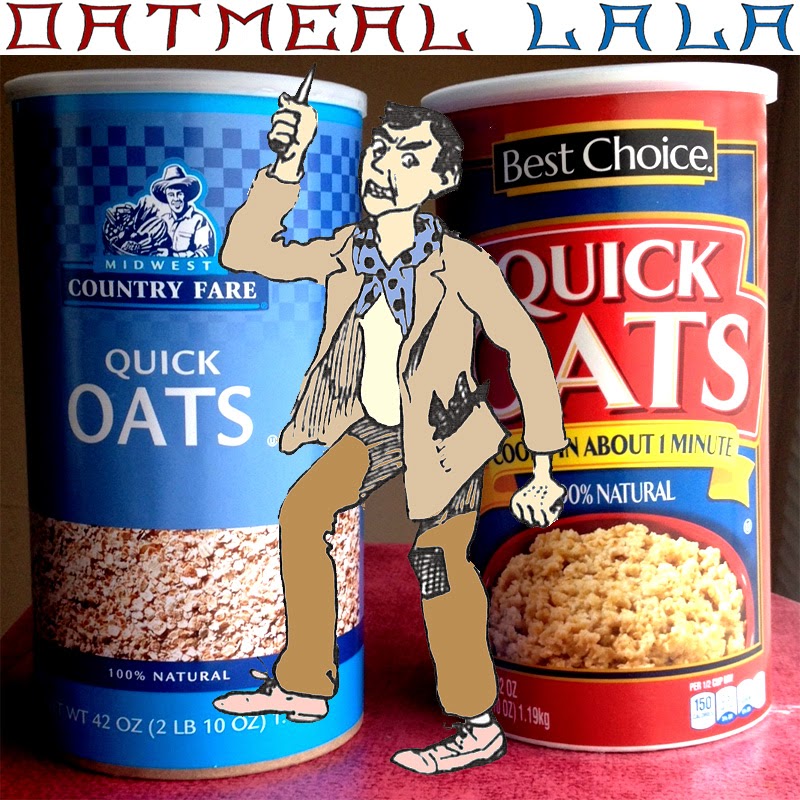 You haven't seen me here a few days. I hate to say why, exactly, but I owe you something. I've just been so seriously strung out I haven't been myself. I couldn't think. I barely knew my own name. I forgot everything I care about, including this blog.

Even now it's coming and going -- I could black out at any moment -- but I'm fighting through the blank spots, and using what I have left of "my legendary discipline." That's right -- even if it seems an eternity ago -- I had legendary discipline. Now, I'm wasted. Nearly shot. Haven't even got the discipline to---- sorry, drawing a blank.

The sad truth is, I'm addicted to oatmeal. God, it feels good to admit it publicly! Of course the biggest problem with oatmeal is they came up with a way for a quick fix. Used to be it took 45 minutes or all the way up to 3 hours to cook a decent batch. I blame the microwave oven industry, because they made us impatient. In the old days, I'd cook a batch, eat it, and pass out before I could cook another. Now it's bang bang bang, three batches and one massive jag of craziness.

So I was almost out of oatmeal, OK? And I was already hopped up on two batches. It was 3 in the morning. I went out and couldn't tell, in my haze, if the grocery store was open or the lights were just in my head. I sat there hunched over the steering wheel, when ... Dammit! ... two or three guys identifying themselves as cops -- they had red lights -- pulled me out of my car.

And I lost my cool. I was all up in their face. "What gives, assholes?!" and it went downhill from there. They could tell I was out of it, but why? I told them the honest to God truth, "I'm an oatmeal addict and you got me ... looking for another fix."

"Oatmeal," the mean-looking one sneered. He and the other mean-looking one talked it over. "Obviously slang for some narcotic, but which one?" These geniuses were talking it over and I saw nothing but haze. Even their talk was haze. They radioed in, then a TV crew showed up and I stripped naked and was gang-tackled by all three mean-looking cops in the ditch. "Give me oatmeal!" I cried as they roughed me up.

Later, I woke up and saw the insides of a hospital, and these mean bastards were there to make sure I didn't snap the gurney straps. The doctor was running blood tests. He said my sorghum and honey counts were elevated out of this world, sweeteners of choice, and that, yes, I indeed had oatmeal in my system.

I couldn't control myself. I went from docile to manic to feverishly crazed in seconds -- the oatmeal high oscillated between utterly flabby weakness to concentrated super human powers. And I felt the powers kick in. Everyone backed up as I eviscerated that hospital room; thankfully, the cops didn't know if they should open fire in a hospital zone.

Going down the hall, my back flap open to the breeze, I made it most of the way to freedom, and was rounding the corner when the meanest-looking cop hit me with a poison dart, hit my butt, piercing one side then crossing over and piercing the other. A double whammy of poison! I woke up two days later, confined in a treatment center.

A Nazi psychiatrist -- this is how Hitler got his start -- swore his way up one list of deities and down another to compel me to talk. "Vhat ees dis 'ottmail' you be smoking!?" "Smoking Ottmail?" I asked, confused, the haze a constant. I passed out and dreamt a beautiful dream, of a Willie Wonka-like world, with rivers of oatmeal (beautiful), but also quicksand bogs (ugly). When Hitler himself appeared, his mustache disgustingly soaked in drippy cinnamon oatmeal-- I woke up.

I blinked a few times, very refreshed, my mind completely detoxed off oatmeal, and vowed to live a clean life. When they took me to breakfast and ignorantly served me oatmeal! Immediately hooking me again...

Using my powers, I killed everyone in my way, stole an armored car, and crashed the gate. Then at the grocery store, instead of parking, I crashed the car through the front windows, craving another box of oatmeal -- and this time -- Damn the World! --  I would eat it with whole milk!

Now I'm home and on my eighth bowl. I'm writing this -- maybe the final post ever on this blog -- with the bastards even now at the door. I fear I'll have to shed even more blood before I'm able to enjoy my oatmeal supper and retire for the night, perchance to dream.
Posted by dbkundalini at 4:41 PM