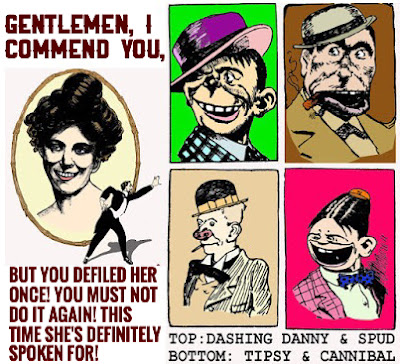 One of my favorite things to do in life is to get a big sincere look on my face, then face someone who's apparently done me a favor or some nice thing, and give them a fulsome compliment and my richest thanks for a job well done. I lay it on thick, too: "Ohh, it's just the nicest thing anyone's ever done, you're such a good person, and when they made you they threw away the mold, your afterlife's bound to be pleasurable, a thousand virgins," the whole bit. I fell on the ice one day and a neighbor came to check on me and, for no more than that, he got 500 virgins!

So in the aftermath of the whole Myra Kula Electra/demons episode, involving the Tractor Promenade and the old Coal Mound, a creepy place when I was a kid, I had to pass out the plaudits and make them good. And appear as gracious as I can, because nothing says "You owe me" like complimenting and praising true scum of the earth, as I faced in the four prisoners. Hell, it's only been a few days and I can't actually remember what they did in this whole episode! But, in their favor, I've been experiencing short term memory loss since falling on the ice.

Instead of me referring back in the posts of the last week, let's just say the four prisoners did something worthy of commendation. Would I have been victorious without them? Absolutely. Would Myra have overcome the demons? I can't see why not. Would the town have survived without the prisoners? Of course. It's like a thought experiment. Let's say in the best of all possible worlds there would've been four or eight guys a hundred times better than these four idiots. Can you picture the four or eight other guys? Can you grasp the fact that they are one hundred times better? All right. We survived without those guys, guys whose contributions conceivably would've been vital! Let's say we couldn't do it without them! And yet we did... Ergo, we could've done it without these four, too.

Be that as it may -- and Spud, Tipsy, Cannibal, and Danny, if you're reading this -- again, it's just a thought experiment. The fact is, we couldn't have done it without you. In a sense, then, you can assume this was your purpose in life. This was the vital mission you were born for. You worked yourself up from childhood, then into a life of crime, not because you were simply meant to be criminals and go to prison and still be there, albeit living on a work release farm. All your errors, all the things you've suffered in prison, all the joy you may have had in ordinary society, with wives, kids, homes, and dogs. All of that was deprived you so you would be in the right place for when I needed you. To accomplish whatever it was you did. And I believe it had to be something. Otherwise why would I be commending you?

Thank you, gentlemen, for a job well done!

When I think of the enormity of the challenge: Every demon from every pit in hell itself, every devil from the furthest, deepest, darkest hole, dwelling in unimaginable darkness, hanging from sharp crags, with the uncanny, disgusting sound of blood dripping into pools of blood, with the sound echoing from vast canyons that have never been seen by the eyes of men... Every scurvy son-of-a-bitchin' filthy slimy, wasted away, moth-eaten bat or devil or demon or wraith or scurvy whatever, hanging from the rafters, pushed back upon the shelf, not able to tell a stalactite from a stalagmite with its eyes wide open in the pitch black sky untouched by the slightest beam of light, lost in an unmapped hellscape of such a description that there's no way even to describe it... Gentlemen, all that you faced! And the sounds, O, the sounds! The screeching, the howling, the growling, the long nailed feet prowling, their bare feet lacerated by stepping on broken glass and nails, then the crying out. The fact that God is so angry in His wrath that there is no broken glass or nails except what is immediately created in the darkness for them to step on as they take the step! That's bad, beneath contempt, as far as I'm concerned, diabolical!

I think of the enormity of the challenge you faced, gentlemen, and I can only say, "Thank you."

Now, gentlemen, let me say in addition: You helped rescue Myra Kula Electra from all that, and for that I am also grateful. But that is where my thanks ends. The black school bus from the prison farm awaits you outside. As you collect your certificate of merit, you will be immediately escorted to the bus, to be taken back to the farm, where you will live out your days. I shared my concerns about you and women with the warden, and he -- a man who once had a dear mother who was a woman -- says you should never again taint polite society with your disgusting animal lusts.

Without bringing the thoughts of pleasure into your mind too much, remember, you had public sex with Myra Kula Electra, the four of you. And that must never happen again! Be gone with you! Get out of my sight! And never come back! Having now fulfilled your purpose in life, take your certificate and kindly leave my sight. Vacate the premises...
Posted by dbkundalini at 10:10 PM