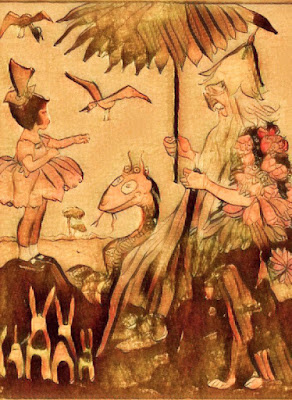 It's the Third Day after, a particularly symbolic and delightful marker for Golden Children everywhere. I remember as a kid how huge a deal it was on Easter Sunday, back when people were into that. Now, alas, all the true believers in the old ways -- various aunts, grandparents, and even parents -- have passed on to their reward, leaving the rest of the world casting about for something to believe in.

It's no secret most churches struggled to stay open as long as they could, coasting on fumes, but by and large it was all in vain. Now they've been converted to Bingo parlors and office space for people needing offices and a place to have them. The magic is gone. Or is it? There are still those of us who don't just cling to, but revel in the spiritual arts. Kickin' out the jams, what have you. Looking for divine romance, let's say. Being born again in immediate ways.

The illustration portrays a smaller, younger version of Myra Kula Electra, one of the temporary changes she went through when the whole terrible (great) thing went down the other night. The hellhole formerly known as the Old Coal Mound, a place where I experienced freaky things as a kid, blew up and has been more or less harrowed. The vile things that came out of there! O boy! Reminds me of the time many years ago, when Grandpa had a turtle 24 inches in diameter, and he fried up that thing and ate it in one meal! He was sicker'n a dog; that was the harrowing of hell, as far as he was concerned!

Also portrayed is me -- The Golden Child, but this time in my guise as Father Nature (or something) -- thankful, as Nature generally is, for the change of seasons, that gives it new life, or at least something different. Choose your ruts well, Nature; you'll be in them a fourth of the year.

I'll make this quick. Once everything blew up the other night, Robby the Red-Nosed Robot versus the Demons -- including the loathed (but now beloved) Myra Kula Electra -- the square of town was a shambles. Most of the principles, including the Tractor Promenade, the Four Prisoners (Danny, Tipsy, Cannibal, and Spud), and Myra herself, were stunned and out of it. I alone milled about, as though on guard. I was stunned but able to patrol the area.

Around three in the morning, the first police showed up. I stood up to them with my gun, and they backed down. I said, "I'm proud of you officers, respecting the authority of a single man with a gun, a one man militia. The number of officers who would back off as you have are few, and I'm proud to say 'You're from my home town!'" We shook hands and they went back to the station to write their report, likely how they were held off by one man with a gun who thanked them for their respect.

Today, though, all that's in the past. We shall clear out of here and let the city do whatever they need to do to get this town back in decent shape. I'm sorry it looks like crap -- and I realize it's going to be expensive to fix, probably requiring years worth of studies and much higher taxation -- but what's a guy supposed to do when it comes to demons? Maybe I could've destroyed them in the country, let's say, and on second thought, that probably would've been preferable. I go to movies here, and this is what I get to look forward to seeing every time I'm downtown?

Anyway, the graphic above: All nature celebrates our victory! The Golden Child has come through the challenge and prevailed! The spirit of Easter has been restored to its former glory. Establish the meeting places! Let this word go forth to every creature on Earth, those who have a mind and heart wherewith to hear! Myra liveth again, The Golden Child is alive forevermore! Writing his blog, with the things of new life to share!

Next: Myra On The Half-Shell
Posted by dbkundalini at 3:34 PM