Chiseling Wives -- What Will She Steal Tonight? 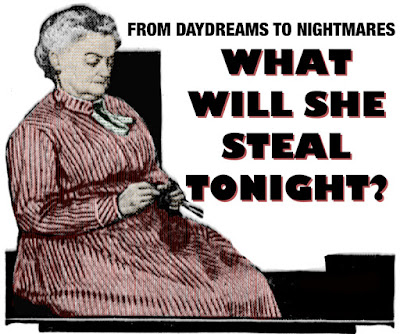 I had to laugh when a dear friend recently told me of his terrible suspicions that his wife was chiseling him out of money. Certainly it’d be pocket change -- I don't know, there might've been bills, if I had to guess I'd say yes. I laughed because this is a problem that goes way back. I'm getting up there in age, and so many times when I was a kid I'd hear guys complaining about their chiseling wives. (I've had more than one offer, as an old man now, to record an oral history of the past. But it's so sad, every time I start in, I break down something fierce. So I restrict myself to articles here -- exposés? -- because if I start crying and it's just me I'm not quite as embarrassed.)

But I'm not embarrassed by what I'm going to call these gals: Damned chiseling women. OK, how you like them berries? Just calling it the way I see it, the way it is. Again, a story as old as the ages and a story as new as tomorrow, when, a'rising from what he thinks was a good night's sleep, there's a poor guy who's going to learn one of life's important lessons: You should definitely have had a vault, somewhere to keep your valuables. Otherwise -- it's sad but true -- you'll be wondering, What happened to X, Y, and Z? Then there she is, still fast asleep. Wonder why she always seems to sleep in? Could it be she was up half the night, chiseling, stealing, creatively nibbling around the edges of things to the point that ... oops, they're gone?

Then there's another case, which I can't vouch for, but I heard it from a friend, who himself heard it from a friend. If you ask me did I see it? No, I didn't. But if you ask me do I believe it? I'd have to say, Yes, I absolutely do. While it's brazen and for that reason barely believable, there's the aspect of performance art to it, and thus it's perhaps (wink wink) taken as a joke, so although it's done in front of a host of witnesses, it's not thrown in the groom's face by witnesses:

A couple was being married. He and she had written their own vows, and as they're repeating them, suddenly he's lightheaded and passes out. Right then, as part of the vows, she was supposed to vow not to chisel money or anything else from him, apparently as his mother had done against his father. So he passes out, that part of the service gets left out, and when he comes to moments later, the minister is pronouncing them husband and wife. Husbands naturally being tough-guys, he didn't say anything about the apparent lapse. (And the video was edited with footage from the rehearsal filling in the blanks.)

Next thing you know, his pockets were being rifled, change from the dresser was missing, and even a few old, very old, 1897 silver dollars his grandfather had given him were gone. Truth be told, his wife used them for bus fare! True story! But he refused to believe the facts, even though they were staring him in the face, until it was too late. One day he woke up and the bed was missing, and suddenly the evidence was unmistakable: She was a chiseler. Stealing everything in sight! Even his clothes. He went to work that day in nothing but a jock strap, and when he came home -- having had to work overtime as punishment for violating the company dress-code -- the house was gone! (To her credit, the wallpaper was neatly rolled up and waiting for him on the curb.)

My personal recommendation would be, Don't jump into a marriage you may regret. Get to know the woman. Listen and observe carefully. Does she seem to be overly materialistic? When she's at your home, is she carrying a clipboard and does she seem to be taking inventory more often and more diligently than would be normal for insurance purposes? Does she seem to have rental agreements lying about for warehouse properties? Does she have an all-consuming interest in online auction sites? Have you overheard her pricing major railroad shipments? The picture she gave you and you kept on your bed stand, does it have both a front and side view? These are telltale signs worth noting.

OK, here's one of my throwback stories from a long time ago, 1970-71, about a guy I knew named Mr. Stanley. I'm withholding his first name. I don't want any trouble from his heirs. Mr. Stanley married, then woke up one night to find that his wife was a chiseler. She was rifling through his pockets. With the worst thing about her habit, sometime along the way she made off with his valuable pocket watch that he had from when he worked on the railroad. Long story short, their marriage was over. Whether he ever got the watch back, I'm just going to say he didn't. Otherwise, why would he have still been so pissed? And why did he lapse from English to complete horseshit gibberish every time he spoke of her?

Be careful, guys. Sleep with your eyes open -- one eye at least -- if you can.
Posted by dbkundalini at 3:21 PM