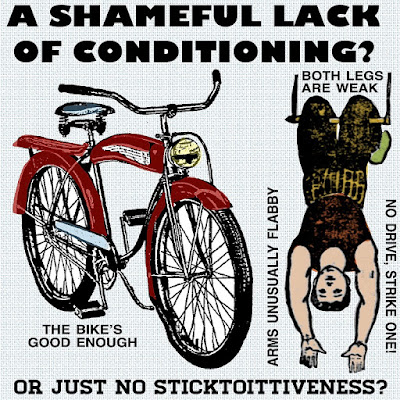 I was excited when they told me the Tuber Flats bike race was this past weekend. I got my stuff together the night before, a few snacks, then with the break of dawn headed out to the Flats. "USA, USA!" I was chanting in the car, even though as far as I knew none of the competitors would be here from other countries. Well, guess what. Instead of evincing nationalistic pride in me, the race epitomized what's wrong with us: we’re lazy, weak, with the slightest physical exertions made only with difficulty.

But I’ll tell you what I believe in: dedication, conditioning, a plan to win, drive, and sticktoittiveness. Each of those I’ve shown throughout my life. Then should others lack those qualities, some more than others, I’ve been able to charge ahead, generally winning, unless things have somehow been rigged against me. The key thing is I’m not just “out there” shooting for a participation ribbon or being a crybaby because the trophy was too heavy for me or whatever.

You could say, I expect a lot out of myself. This even true when I was a kid. My dad explained the mathematical concept of percentages to me, telling me that 100% is the highest you can go. You physically cannot do more than 100%, he said. But then when everyone else was gone, he confided something that I can’t believe I am now revealing: You can give any effort 150% or more. It blew my mind. You mean I can do more than is possible?! I never forgot that lesson. Mostly because I put in 200% effort to remember it.

One of my first efforts at applying the 150% standard was, I believe, in 4th grade. It was track and field. Kids pole vaulting, doing the 40 yard dash, throwing shot-put, etc. Well, the way it happened — and I’ll swear this on my late mother’s life — I really poured it on in a running race, and came in first but was cheated out of the trophy or ribbon. There was some confusion. This was before instant replay. The other kids said I won, but no amount of bitching about it with the crooked judges made any difference. It’s run through my mind ever since. They knew I had the inside track when they saw me giving 150%, and obviously they judged that an unfair advantage.

OK, today I went to a big bike race in the area, Tuber Flats, full of excitement. There I was, prepared to spend a great day at the track. The first race was coming right up. 11 laps. Very exciting stuff, I thought. The various combatants looked great in their skin tight sports colors, expensive tennis shoes, and on the coolest bikes. Whether they had goggles on, I can’t remember. I was right at the starting line for the first race. “Gentlemen, this is the first race of the day,” an old retired jock told them, “and you get to set the pace. We want a clean race, a fair race, but a hard-fought race.” And so forth. He marched up and down the line of riders and sharply cracked a whip for effect. Then they were off.

How exciting as they scooted around the track! 11 laps, remember. But by the time we were up to 5 laps — a mere 5 laps! — some of the guys were already losing it, drifting back from the pack. I thought, You gotta be kidding! These guys haven’t got the stamina, the conditioning, the drive, the sticktoittiveness to keep up with the pack for even half the race?! That blew it for me, totally violating every standard I have for giving your best, a decent effort.

So as it turned out, for me it was a huge disappointment. I immediately grabbed my cooler, pennants, program, noisemakers, confetti, megaphone, binoculars, video equipment, and flower wreaths (in case I saw some real favorites), and headed for the car. If that’s the standard they have, I’m thinking out loud, they can keep the damned thing! 5 measly laps?! You have to figure the guys they put out there first were among the best. Isn’t it common to put your best foot forward? You don’t send out stinkers the first thing, do you? Hmm, maybe you do. Then the better guys. Then last the champions.

Why waste your time? If you’re not in good enough condition to keep up, why bother? You think a big time guy like me wants to sit there and watch a half-baked effort? What’s the use? All the way home I ran it over in my mind, at times shouting out the window, making fun of those guys. “I’m just in this race because ... I can’t think of why I’m even here ... just to make a sickening display of myself, I guess!” Where’s the drive? Where’s the conditioning? Where’s the dedication to the effort? Is 50% the best you can do? Not even 100? Nothing approaching 150? Sheesh!

I got out of the car at home and flipped the bird in the general direction of Tuber Flats. Next time you have a bike race, count me and my flower wreaths and pennants out!
Posted by dbkundalini at 10:17 AM