Enhance Your Marriage With Drudgery 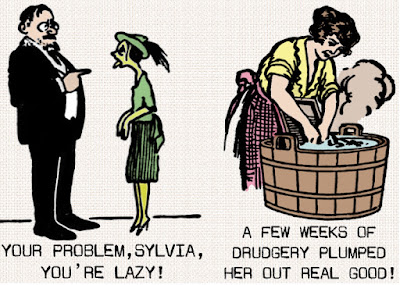 Psychologists today -- the good ones -- tell us the basic problem with society is we're too pampered, which is the same thing as saying we're too lazy. We want more, more, more, but then we're dissatisfied, which leads to all the usual physical/mental/social reactions: despondency, renewed craving, further seeking, then back to despondency.

I suppose it's not hard to see that this is a vicious cycle. As far as I'm concerned, frankly, I don't think I've seen a cycle quite as vicious in many a'year. Meaning, I would personally like to take society as a whole and just beat the living snot out of it, all the while reviling it for not having the brains God gave the teetsy fly, or for that matter the big ones. We as a whole are stupid, dumb, and ignorant, with a side of pigheadedness in the mix to boot.

But I've observed that there's a few (and the number's growing) who've not only diagnosed the situation before us but are doing something about it. Progress on this front has been seen in several marriages I know of. Which have taken this course: The husband's off working all day while the wife's sitting at home watching whatever's-on, essentially a mix of soap operas and game shows. These portray "the good life," leading to disenchantment with her own, then malaise, then laziness, then giving-up entirely. The last cogent thought she has is the vain yearning for a robot maid, which are still very expensive.

Anyway, the most successful reversal of this course that I've seen is by a guy (a successful factory foreman) and his stay-at-home ball and chain. She was very into the whole lifestyle described above, as dried up and desiccated as anyone can mentally and physically can be. Dishes were piled to the ceiling, the laundry looked like a Chinese riot, the toilet like something in a nightclub, the pets had broken loose from their shackles, and the kids, I believe I heard they'd run away, but possibly they'd been sold to a circus so "Mom" could have pin money.

Of course her husband, Mack, was beside himself with worry and regret: "Why'd I ever marry that damned shrew?" and worse questions. He thought he was going crazy, so he went to visit a psychologist. This particular psychologist had a counter-intuitive approach. (I once had a professor who called a lot of things counter-intuitive, everything from dirty firetrucks to war crimes. Dirty firetrucks, if people see dirty firetrucks they'll work harder to prevent fires. If we have more war crimes, whatever whatever, I can't remember what he said. But how about that theory of firetrucks?)

Anyway, the husband, Mack went to a psychologist who also spouted the counter-intuitive line. He said the wife, Sylvia, her problem was she was pampered and therefore bored. She needed a purpose in life, which, according to this psychologist (also named Mack, as in Dr. Mack MacMackleroy) could be attained through drudgery. "Wait, wait, hear me out," Dr. Mack said to our Mack. Then he explained point by point how there are two paths in life, luxury or hard work. The yearning for luxury is interesting, it's the attainment that's boring. The time-tested life of drudgery, apparently aimless, bests them all.

You get rid of time-saving appliances, the frills of modern communications, and even the luxuries we think we can't live without, fancy-schmancy stuff, like solid gold butter trays. Then you live as simply as possible, pouring your sweat into hard work, to the point that drudgery becomes a cause for pride, leading to good feelings in the marriage, leading to hump-a-humpa with feeling, leading to new kids to replace the old, unless the woman is past that age and has to compensate with more pets. I knew a lady in a mobile home with more pet snakes than most of us have flies (teetsies or megas). Clearly she'd embraced the life of drudgery -- along with the counter-intuitive benefits of fear -- because taking care of those slithery bastards would be so horrendous, it'd have to give you a better outlook!

I went by to see Mack and Sylvia over the weekend. Mack gets his own drudgery-quotient governing men on the assembly line with a pistol and horsewhip, so he was taking it easy. Whereas Sylvia couldn't be stopped. She worked the whole time I was there, mostly running from bathroom to bathroom, going by me numerous times with a dirty dripping brush, trying, apparently, to make each toilet equally clean. The look of pride on her face -- and Mack sitting there with a stopwatch timing her and shouting criticism -- did my poor heart good. I left knowing it could be done. Marriage could be happy (1), and (2) Society's got a long ways to go to catch up with these dear friends.
Posted by dbkundalini at 11:25 AM