A Mosquito Tent O'er My Grave 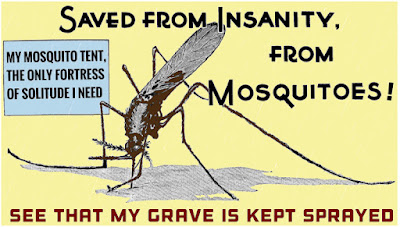 NOTE: The following is an imaginary scenario, assuming that I will buried in a grave after my decease, and that I have a wife, children, and loved ones.

Who likes mosquitoes? I don’t. They’re the bane of summer. They prove the point I've believed from childhood, that there’s nothing in nature completely good. Summer looks like it'd be fantastic, known for warm temperatures, beautiful weather, and summer vacation. Then come mosquitoes! Along with their cousin bugs, ticks and the entire sad messy disgusting crew, evolution's Trump-like jab at existence.

I have a mosquito tent. But I hardly ever put it up. One, I’m not that tempted to be out in the summer. Two, they’ll bite me while I’m putting it up. The only good way to do it would be to put it up in the garage and walk it out to the yard, but by the time I got there the wind would kick up and blow both me and it away.

Still, whatever inconvenience I face has to do with me being alive and present in the world. I firmly believe that I didn’t face any of these issues before I was born, which was billions of years. It follows then that I won’t face them when I’m gone, regardless of how long that will be. Still, it’d be at least symbolically a good thing — forever preaching my doctrine to the world that mosquitoes suck — if I had a mosquito tent o’er my grave.

OK, let me make a few keystrokes on my Last Will and Testament.doc and it’s done! It’s now in my will, which is inviolate. No matter how inconvenient anything is — burdensome, uncomfortable, or outlandish — the heirs have to do it. Enter my two sons and daughter. Along with the wife, if I should predecease her. And the way she raises that rolling pin when I’m the slightest bit late after a pleasant evening at Joe’s Place tipping back a few cold ones, then getting home before the mosquitoes are thick, she might truly outlive me.

The big day comes. I croak. Now the fun begins. They argue, they fight. “We have to get a mosquito tent for Dummy's grave?! But only in the summer. Which, knowing him, means strictly the first day of summer and not to exceed the last.” Yes, along with other complications. It needs to be o’er my grave, which can be tricky, since no one’s there to guard it. Kids are always stealing stuff on graves, or messing with it in some way. My estate might need to buy several tents in a season, which could get pricey.

Then there’s the optics. The cemetery board will obviously have a problem if it’s blowing across the field, or not staked down properly, or not secured from the other elements. The last thing the board wants is an eyesore. Which I get. A cemetery is a place of solemn dignity, remembering everyone from town. There’s some guys out there I remember as a kid. Guys who dug sewers, ran gas stations, sat in lawn chairs across the road, and others. All good memories. If they were to speak up and say “We knew that kid would grow up to be a nuisance. Now he has a tent encroaching on our mound," that'd make me feel bad.

Anyway, the kids and wife will have to really devote themselves to the task! Like in the old song, “See That My Grave’s Kept Clean and My Mosquito Tent's Presentable.” So there it is. But then indeed it does blow around a few times. The board complains. The family tries to comply. But the wife dies, the kids have other problems. The board relents, the wind after all is an act of God. Then the family argues, “You were supposed to do it!” "No, no, it was your year to handle it!" Suddenly the kids aren't speaking to one another. And no one’s watching out for anything. Then the kids are on the road, get hit, and now graves are popping up all around me.

Finally, the groundskeeper takes it upon himself — and he’s not reprimanded in any way, in fact applauded — to haul my ratty mosquito tent to the dump. My grave is now unprotected and ignored. The Lord returns. I’m resurrected. It just happens to be June 21, at which point my spiritual body is immediately attacked by resentful hungry mosquitoes. With me itching through the entire last thousand years judgment. Sad ending, but every word true.
Posted by dbkundalini at 11:19 AM