Do I Want Some More Whiskey? 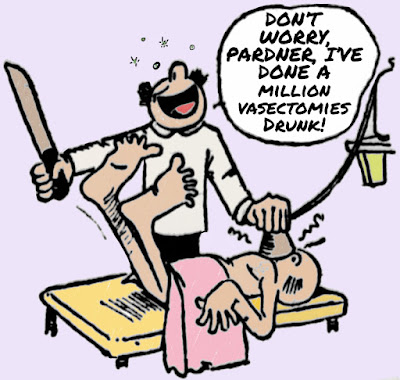 I’m currently on a three-day bender, woo hoo! Didn’t know it’d go this long. Figured a day or two and I’d be sated. Turns out I was wrong. I don’t see an end in sight, unless it’s tomorrow; that’s likely; it can’t go on forever, can it?

Look at my typing. You tell me, is this making any sense? To my eyes, it’s a chicken scratching on the computer. I’ve got the font blown way up, compensating for the blurriness. And there's hallucinations. I hope that’s what they are. My flat white bedroom walls are an outrageous exaggeration of their normal selves. Settle down! I can’t tell if they’re coming at me or trying to get away. We haven’t discussed it, nothing beyond me telling them yesterday about this time, “You stay on your side of the room and I’ll stay on mine. I don’t want any trouble, and I don’t think you do either. But you tangle with me, I can't be responsible. I will stab the life out of you; I’ve done worse!” I’m fairly sure the walls are OK. We’re at an impasse.

Wow, my head is spinning. But it’s a good spinning, good ha ha, not bad boo hoo. “I’m Loretta Young!” I heard myself screaming like a maniac. Then I toyed with the name Loretta. Try it next time you’re faced. “Loretta!” It’s hard to get it slurred out. It’s a very guttural name when you’re temporarily under the weather. But conversationally still interesting: “So you’re Loretta Young. THE Loretta Young.” “Yes, sir,” I think I heard her say at the usual pauses in any conversation. The Loretta Young who used to be on that old TV out in the garage, back when it worked, our first TV? “Yes, sir.” She elaborates “I was simultaneously on millions of sets, coming out in a lovely dress, spinning for the audience.” I took a drink and exclaimed, “I thought I knew you from somewhere! You’re Loretta Young!” The TV broke again and she was gone.

This is damned good whiskey. And, yes, that's whiskey with an E. I’ve seen it both ways, and there’s some explanation for that, albeit lame, something to keep dictionaries busy. I remember when I was first “turned on” to whiskey; it’s been a while. I was in my 20s and given to massive misbehavior not in keeping with the values the den of wolves raised me with. Mostly blowing off steam, much like I’m doing here. Woo hoo! But, thinking back, it was whiskey, along with all the other stuff they serve, that first loosened my talk tapes. Considerably!

I remember one old boy. This was 45 years ago. He was in his late 60s or mid 70s then, so he’s got to be dead today. Just like 45 years from today, I.... I’ll return to this point later if I think of it. Anyway, the guy was ancient. And what did he happen to have, a baggie of something. Even now I’m reluctant to tell anyone precisely what happened, so let me gloss it over with a sincere, Nothing happened. I said, “No, sir, I’m drinking whiskey! Along with other draws and mixed drinks. Boilermakers, which is whiskey followed by a draw. Back then I was a gulper, get it down fast as possible. Now I’m a sipper. Do I ever pick up steam? Of course. Till Loretta Young shows up. Which, it could be Loretta anybody, I wouldn’t mind. Loretta Lynn. Isn’t there a famous Loretta Luperca? No, it's Luperca Latouche, Finnegans Wake. Another sip of whiskey!

Think I’ll have one for my health! Pour it, pour pour pour, perfect, 1 tablespoon. Here's mud in your eye, slowly sipping it. To my health. I’ve always thought I was in great health. I've never had much wrong. But lately I’ve noticed in the mirror that I look thinner. I usually can't see myself as I am. In the mirror, I’m one thing. In photos, another. But it has come to my attention, somehow, that I look thinner than ever in the mirror. So, like the old boy above, the guy in the bar with the baggie, 45 years from now, I will have crossed over the rainbow bridge, which I’ve learned is what modern dying pets cross over too.

I’ll thin down to the point that I’m like one of those long green stick bugs. Then keep myself from breaking till I get to the destination, where the rainbow bridge is. I’ll stand there, waiting my turn. Kids are off in the bushes watching their pets set foot on the bridge. I’ll wait and wait and wait, thinking, “Good God, why are there so many dying pets?” It’s because there’s an endless population of them. Every dog has 14 puppies. And cats. They have nine lives, which means nine deaths each, so they’re clogging up the bridge worse than anyone. Just when the coast is clear, I try to get up and one of my thin legs snaps. That hurts. But thankfully I have a little whiskey to pour on the wound. Suddenly the bridge is clogged with a nursing home that just happened to burn down 10 minutes ago. Everyone died. Again, I wait my turn, dousing the leg and alternating with a drink.

Sounds like I’m in no hurry to die. I have reasons to live. This blog’s a big one. I haven’t found anyone to take it over. Everyone that comes to me wants to load it up with ads, but I refuse. Online advertising on blogs is one of the sickest sights I've seen. Then you have to be churning out little blurbs. A paragraph, an ad. A paragraph, another clump of ads. So you stick to two paragraph posts because you need to have many posts, so you’ll have lots of ads going all the time, popping up everywhere, “You’ve won this or that bullshit.” Anyway, don’t get me started on that subject. “No, sir!” I cry out. Then I settle back in my chair, have a drink of whiskey, and the rainbow bridge comes again into view.

Back at the rainbow bridge: A turtle I had in the 1980s just died and swam by. How about that? I found a turtle and took it home in the 1980s. I was living in a town. Then it came time to move and I took it back and released it with a word of blessing. And now I catch sight of it after all these years on the rainbow bridge. “Hey, whatever your name was!” And another sip of whiskey.