A Little Bit Of Both 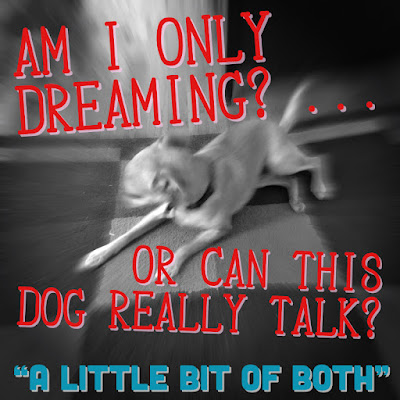 When's the last time you had a decent conversation with a dog? It's probably been a while. I know, because I've had dogs. Either they're barking at squirrels, people, other dogs, or the mailman, and that gets old fast. All they know is barking.

I have some experience, though, with training dogs. Over the years it's been remarkable, some of the things I've managed with dogs. I've taught them to roll over and play dead, how to bark for their supper, and how to beg for food or whatever folks are willing to give us. One of the best tricks is rolling over and playing dead. Since it gets tiresome having a dog, if they play dead long enough that's a break for you. Barking for their supper's not as good, because they're always hungry and don't know supper from breakfast, so they're always barking. If you can teach your dog to beg for whatever people are willing to give, you can set her at the Walmart entrance and make a decent living. I'd sit there and beg myself but I'm too proud. But imagine the sweet coin!

A few years ago I think I was involved in teaching a dog to talk somewhat. I say "I think," because I've had a bout of something one of my doctors calls memory loss with a side of aphasia. I'm always remembering things that never happened. Including perhaps my doctor even saying that. I'm hoping to join a "Discerning Reality" group, but it's hard to know for sure that the others are really there, wherever it may or may not be. But I have an application in, and hope to hear from them if indeed they exist. For the sake of argument and this post, let's say the dog talked.

OK, we're saying it's true. I remember I taught one of my dogs to say "A little bit of both." Then I might ask her, "Do you want pizza or stew for dinner?" And she'd say, "A little bit of both." I'd rather she had a choice. It seems healthier, pizza or stew. Normally I think of dogs as completely ravenous for whatever you set before them. I've seen dogs eat hardened, decades-old food that's been preserved as a cinder in a campground fire-pit. I remember one that actually looked like a dead rat, till you looked at it up close. Up close it looked like something from a volcano, sort of a cinder, sort of a glossy artifact of the earth's molten core. The dog would pull it out and gnaw at it, never making progress but never complaining either.

How about this question, "Would you rather have this week-old TV dinner or that volcanic cinder, rat-thing? "A little bit of both." OK, I didn't approve of her eating the cinder, so I threw it away and split the TV dinner in two. She ate half of it and assumed the other half was the cinder. Had she truly wanted the cinder, I might've said, "Are you crazy or merely stupid?" Then when she answered, "A little bit of both," we'd be on to something. I'd definitely have to agree!

That dog, she always wanted to go on walks. But my own preference naturally was to tie her to a post and go shopping. Walking, walking, walking. The only reason a dog wants to walk is to find something to bark about. Or something to eat in the neighbor's yard. That used to be OK, but now with hidden cameras and porch-pirates, I'd be totally worried I'd be busted and end up on the news. "Man's dog eats Amazon shipment of premium steaks for dogs." We both go running, I break a leg, the dog breaks two legs, and we end up on a viral video with people laughing and saying, "Serves the bastard and his dog right!" So I would want to walk her only where no one lives. That way if she found something to eat -- and she once found a dead deer, which we both ate for a month -- there's very little shame in it. But having taught her to talk, she didn't overeat. "Do you want to eat some of the deer we found or fast-and-pray?" She'd say, "A little bit of both," so we whet our grinders on the deer for an hour and also prayed the Lord for future dead animals.

Anyway, to confuse her, I started slipping in the word "ONLY." Like this, "Do you want to play in the backyard ONLY or do you want to go to the park?" When she said "A little bit of both," I had her in a mental Chinese finger-trap! Ha ha, how smart I am, but devious! I said the backyard ONLY, so there's no little bit of both. It's a logical problem that I can take in at a glance, in a second, and yet one that makes even my head spin. Because the question is couched as an OR question and she was hopelessly trapped! She couldn't say, "The backyard only" or "The park only." Just a little bit of both. That could've given her a brain hemorrhage that second if she had the wherewithal to contemplate it!

As it is, at this distant remove, with me 20 years older and more easily confused -- I fell down the stairs last night because my mind drifted and I forgot where I was -- it's giving me a brain hemorrhage too! Ever had one? There's a pleasant buzz to it, but if you don't take care of right away, you die. The positive side of which is, Everything else you suffer, you escape. But if I could only say "A little bit of both" I'd be insane within the week. Try it. Take the "Little Bit of Both" challenge. Video yourself in the backyard answering everything with "A Little Bit of Both" and post the results. You'll go crazy.

The way it ended, that dog died and I'm worried about her afterlife. I remember asking her at the end if she was going to heaven or hell, and she said, "A little bit of both." OK, bone voyage, don't forget to write if you have anything else to say!
Posted by dbkundalini at 12:19 PM