I Could've Been a Job Foreman 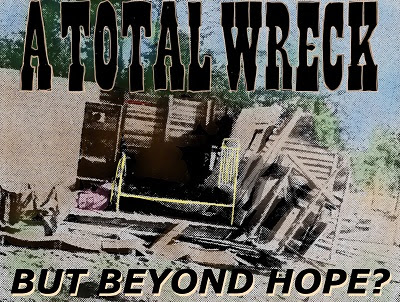 You gotta love the perspective of an old man, able to see things so clearly what you shoulda coulda woulda done if you could do it again. Because if you choose wrong, you're sunk, all is lost.

I’ve definitely seen the career opportunities I've missed! With every passing day that drags by on getting Grandma's house fixed, I now see the golden opportunities of being a job foreman. What’s he do everyday but look for more complications, more things wrong, more ways to drag his feet? I could've done that.

It’d be easy to be a job foreman. Always get up on the wrong side. Nurture your mean streak. Limp from one task to another. Take the insurmountable as your default view.

Of course I'm seeing the renovation work on the house as hopeless. Plus, I'm in "The Big City," barely able to communicate with the job foreman in a useful way. Which means I'm screwed as they attempt to begin, then someday possibly finish their hopeless mission. They're like old war heroes, "Boys, I’m going in and I may not be back. I’ll be hip deep in big muddy and pressing on." So before you choose any job, pick your retirement plan; it could be a long hard slog.

The house is a mess. I'm hearing about mold, fungi, a thick cadre of pests and pestilence, all of it thick and messy from the roof beams to the foundation. Making me wonder, How can so many things go wrong? What'd I miss? I get good counsel from my pastor occasionally; they had a charity fund drive for me. I really appreciate his comfort and counsel, saying, "The morning's always darker just before dawn, or just after the job foreman shows up."

It's the job foreman, really, that inspired me to vacate the premises, the town, and even the state, to go to the Big City while they work ... Anything to be away from his bad attitude. His original sin — or virtue, if you look at it from the point of view of every task being a cash cow — is believing "It can’t be done." Whatever the problem, it's a lost cause, it's hopeless, no one can do it, and I may as well be the one to break it to you.. No doubt he secretly revels in it behind my back.

From their point of view, these are all billable hours, you get a job like this, you look ahead to the payout. Knowing there’s nothing I can do. You try to report someone to the authorities, it's a two pronged challenge. One, they're used to disgruntled homeowners and chalk it up to you being disgruntled. And two, they know contractors and job foreman have families and have to eat, so back off, this is the way they do it, by screwing you high and low.

The simple truth of the matter is, No home renovation is hopeless, really, they just make it feel that way. I don't care how big the fungus is, it’s not too big for the mind of man to surmount. If he wants to. But basically it's obscured because we are naturally scared away by fungus, spiders, microscopic hungry house rot. It looks hopeless to the layman, so we put our hand in the hand of the man who promises us hope. "I can do it!" The job foreman beams when he first arrives. It's downhill from there.

I might organize a support group for guys like me, caught in the home renovation trap. The place is too far gone to fix, but I'm too poor to afford something better. Or too stupid to see the possibilities. I don’t like debt. But when you’re an old man without kids, debt should be your friend. You go whole hog, you die, what are they going to do? You have a great house, you die.

I was never devious enough, rotten enough, or talented enough to have been a job foreman. At least with the knowledge I had then. That's the other thing about old age. You can easily see, Most of the helpers you get as you go through life have a million devious schemes up their sleeves. With the first thing being the paperwork. Make the paperwork complicated-looking, thick as your arms, get you to sign your life away. Surely there’s more codicils in the paperwork negating your rights than granting them. You're the little guy, you're screwed from the get go.

But I could've learned that. Imagine how empowering that'd be. I should’ve done it. Set my sights to be a job foreman, with all the personal confidence that comes from screwing the poor homeowner. You've broken him already. What more can he do but shut up and get the hell out of your way, while you and your team move in for the endless road ahead. I wouldn’t doubt if they were making things worse. Vials of poison, test tubes of virulent pests that they've imported from the jungles of Peru.

This is how the plague in the Middle Ages started. A kid wanted to be a job foreman on a castle and set about it. He worked the rest of his life, the apparent work on the castle limping hopelessly along, while the lord who used to live there was in the The Big City, unaware what shenanigans were going on at the manor.

I'm too old for this information to do me much good. I've got arthritis, it hurts merely to lie in bed. The death angel has me on the list. But you're young, your whole life’s ahead of you! Don't be a doctor, a lawyer, any pissant job like that. Be a job foreman! And be set for life, tormenting, terrorizing the populace, but making enough money, what’ll you care?!
Posted by dbkundalini at 12:43 PM