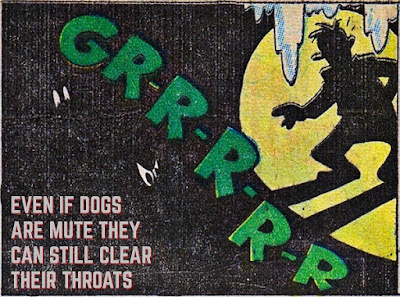 I’ve been living in “The Big City” while they work on Grandma’s house — fumigation is the least of its problems — so I’ve been out cattin' around everyday. Checking out things. Plus, I’m actually a minor player in the recycling industry, in that I pick up and cash in aluminum cans. I’ll make a post about it some time.

I see myself also as patrolling the ‘hood. But most of the vandalism I see appears to have happened years ago. With the bad guys long gone. Windows are out, broken glass is everywhere, and some of the buildings are on their last legs. Makes me rethink Grandma’s house; it's not too far gone.

In all this patrolling and can rummaging, I’ve been interested in the obligatory signs warning thieves, burglars, vandals, and squatters. There’s a small tree-covered area nearby, and I discerned right away some homeless folks were living there. Which was cool with me, so I didn’t do anything to disturb them, just kept my distance. After a while, though — and obviously it would’ve been better if they’d stayed there only briefly — their presence was discovered by the authorities or owners. Who went in, piled up all their stuff on the curb, then hauled most of it away. Now there's blinking light posts at the various entrances to the wooded area.

The other thing they have, to keep folks out, are warning signs. Yes, yes, in “The Big City” warning signs are very common. At the wooded area, the warning signs tell of “Video Surveillance,” which would seem to be false; wouldn’t you see an occasional camera somewhere? Or are they spending big bucks on a satellite system, a joint effort with NASA? Still, I don’t go in there, mostly because I already have a place to flop, and also I’m careful about crossing boundaries. There used to be an old guy in my neighborhood rumored to shoot kids with rock salt.

OK, the signs. That’s what I’m on about today. While searching for beer cans (and other aluminum goodies), I’m always seeing warning signs. A bunch of them are posted on buildings that have been ransacked so many times, it’s obvious no one takes them seriously. Actually, my biggest fear would be to have other ransackers there when I went in, then they’d ransack me... Anyway, the chances of these old buildings having anything of huge value in them now are pretty low.

Thinking it over, though, I had a great idea, which would be to make signs saying, “THIS BUILDING IS PROTECTED BY MUTE INVISIBLE GUARD DOGS.” Is it true? I mean, really, someone could diligently search and find actual non-vocal dogs who’ve also had the added misfortune of being born invisible. When it rains, it pours, right? So there they are, a big bowl of food and water keeping body and soul together, the whole works. They're healthy, they usually get decent sleep ... until the big night comes.

Finally someone's stupid enough to enter. Some guys, looking for metal bathtub fixtures and wanting to strip the precious wiring out of the walls, show up one night. They’re drinking up a storm just before this, getting up their nerve. Because a sign about mute invisible guard dogs truly is intimidating. But they convince themselves, "This sign’s just like that one at the wooded area, a big fat fake!” Then they go in, and these dogs — vicious bastards when provoked — get hold of their legs; one nearly escapes but the dog takes a chunk out of his ass. Exciting stuff.

Pretty soon the dogs have the bastards cornered — who by now have dropped the bathtub pipes — and they make their final merciless lunge, right for the jugular! Blood’s spurting out everywhere, it’s a mess for the ages. Enough blood to make you sick. The perps go on to meet their reward in hell. The next day the dogs aren’t all that hungry. I come along on my bike, find the cans outside that the guys drank from (who were also litterbugs), catch a glimpse of the sign about the invisible dogs, shiver to myself in fear, grab the cans, and get the hell out of there.
Posted by dbkundalini at 4:20 PM